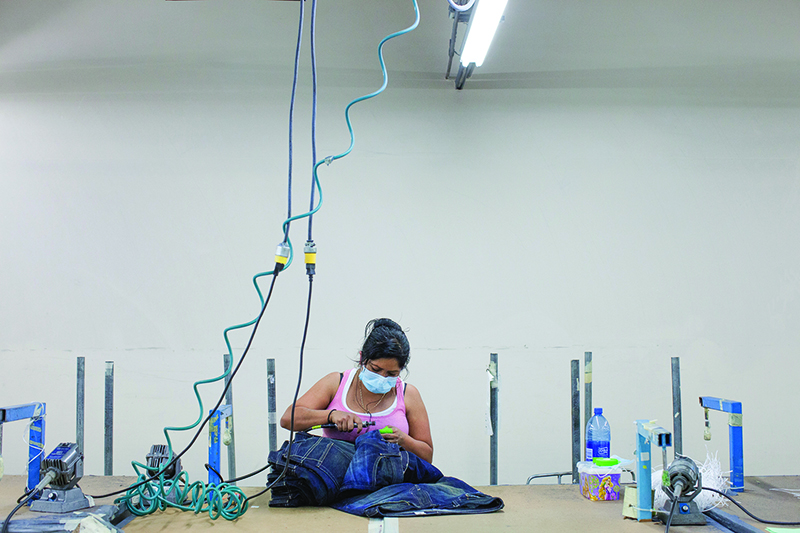 IN THE LOS ANGELES ‘Jobber Market,’ the hub for fast fashion within the U.S., the multitude of failures that arrives and presents itself at every turn is overwhelming. It comes with the disorienting sense that one will never possess enough information. Or that the predictions on colour, trim or trend, that provided some profit for today, will turn out quite differently for tomorrow. It’s the daily ‘not knowing’ – that one step away from risk, bankruptcy, failure – that manifests itself in paranoia or accumulates in the form of total exhaustion among all those who work in this garment district.

I’ve been coming to this neighbourhood in downtown L.A. for the last five years to carry out research on the fast fashion industry. Considered the nerve centre for fast fashion in the U.S., the Jobber Market consists of nearly six thousand clothing lines designed and distributed from small five hundred square feet showrooms that line the streets and alleyways of one square mile. Most of these labels are in actuality small-time clothing manufacturers, operated by Korean American and Korean Brazilian entrepreneurs, who produce clothing for the majority of American retailers and have fuelled the fast fashion industry within the U.S. Most of the cheap and trendy clothes are designed in L.A. among first and second generation Korean Americans, manufactured in China, then shipped back to L.A. to be distributed by retailers like Forever 21, the largest fast-fashion retailer in the U.S. which is also owned by Korean Americans. And even though this clothing market – within this small urban neighbourhood run by immigrants and their children – might just be a small blip of a place in the global universe of fashion, the risks taken and failures endured in its alleyways and narrow streets are the reverberations of fashion’s entire global supply chain. Like little filigree tremors, failures felt here reflect the ‘continuously-being-made’ global landscape of destruction in fashion in the twenty-first century, yet these spaces also serve as pockets of hope and possibility for all those who work within it.

It’s quite astonishing to play out all that could possibly go wrong in the making of a single piece of clothing. It may begin with news of a rusty button or a loose stitch, or that the grading of a shirt is off just by a quarter inch in an order of thousands of blouses or tops. You may have manufactured the top in horizontal stripes in red or black – those French boat-necked shirts always seem to come back into trend – only now your timing is off since all the showrooms in the district are beginning to sell them. You might be awake at night thinking about all those thousands of pleather jackets you have stuck sitting at the port, held captive until you can come up with the cash to pay. Or you’ve just gotten off the phone with your big American retail buyer who is going to fine you ten cents a piece for having the hang tags on your order pinned in the wrong place. The workers in China are on holiday or on strike or there is some kind of problem. One of the factories you use, the one that can produce so many different types of stitches, cannot do the kind of embroidery you are asking them to do. The department store buyer decides that your neighbour in the showroom next door will sell a similar product at a slightly cheaper cost – did your factory cut a better deal with her? Did your neighbour rip off your designs? Did they talk? Your employee, the godfather of your child, just took off one day and you learn many months later from all the gossip in the district that he had to cross the border into Mexico to see an ill relative but couldn’t tell anyone including you. Now he can’t get back across because the cost of the coyote has jumped since the last two times he crossed. On the worst days, you tell me about the closeout buyers who make their rounds throughout the district sniffing out fear and desperation. Like ‘rats stinking cheese,’ you tell me – your failure means a bargain to them, an easy load for resale in another market or continent. A copy of a cease and desist letter arrives from a powerful online company being threatened by Burberry because of a jacket you’ve manufactured for the company – its lining poorly resembling the signature Burberry plaid – never mind that you’ve only made and sold two hundred pieces, and that your profit margins are miniscule.

In the L.A. Jobber Market, it is the potential of failure at every fleeting second of the making of clothing that makes fast fashion within the U.S. possible. In such a volatile global market of clothing where consumer taste is finicky, every single decision has the potential to collapse a line of clothing like a house of cards. All relationships of trust are held with suspicion; they are fragile and attended to, performed and maintained. Bankruptcy is palpable and embodied in the quickly changing nature of store names. It’s no wonder then, that this community of fast fashion manufacturers, garment vendors and traders are all so highly religious. For all the times one fails, left in debt or with nothing, one needs to have something permanent to hold on to – family, salvation, faith, and God. The walls of showrooms are often adorned with crucifixes or bible verses. Printed on the bottom of every Forever 21 yellow shopping bag is the bible verse John 3:16: ‘For God so loved the world that he gave his one and only Son, that whoever believes in him shall not perish but have eternal life.’

I study these fragile ecologies of clothing that have sprung from our twenty-first century globalised fashion industry. New markets have emerged among the massive movements of mostly female migrant workers who today labour in the countless and anonymous garment factories around the world. These fleeting interstitial spaces are the meeting place for all kinds of risk takers, intermediaries and brokers: the buyers and sellers, nomads, and traders. Few make it big and most scrape by, making little profit while risking everything. Come to one of these markets and tug on a thread and it will inevitably lead you to the big name retailer or brand selling this stuff in your hometown store. Tug even more and it may lead you to the very bottom of the supply chain, to a migrant worker on a global assembly line of production. The Jobber Market in L.A. leads to Guangzhou market in China’s Pearl River Delta, Qipa Lu in Shanghai, or Bom Retiro in São Paulo. Keep following the supply chain and it will lead you to the ‘second’ or ‘third tier’ garment cities of the world, to industrial zones, manufacturing hubs, factories and sweatshops. 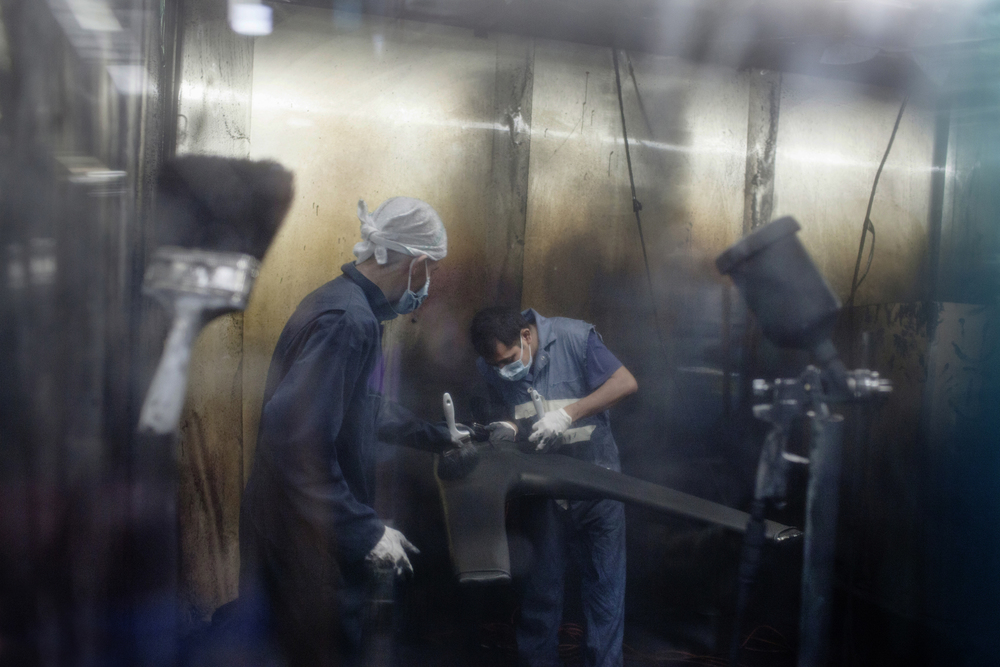 I am attracted to these interstitial spaces because failure and despair sit so intimately with aspiration and hope. These clothing markets, like the one in L.A., are a landscape of urban pastoral foraging – countless layers of ordinary people who are on a search to catch the next trend, or strike a deal with a fabric supplier, or unload dead stock. These men and women find gems in the rough and turn a profit out of nothing, all from the buying and selling of clothing. These are markets created out of almost nothing, often comprised of migrants who have had to move several times – back and forth between cities and across borders – often bringing with them nothing other than their entrepreneurial skill and creative minds, sets of experience, diasporic connections and knowledge from having worked years in the rag trade. This kind of work often permits one to be one’s own boss, to work outside of a wage system even if to make such small profit. And for me, the innovators and creative makers are among these traders, who emerge from the most tenuous spaces that global capitalism in fashion produces.

Failure sits closely with innovation and creativity. Walking through the wholesale market in Shanghai, a friend explains to me that the copies of the copies of the copies should actually be thought of as a game of Chinese whispers; the object that resembles Chanel, Prada and Michael Kors combined has gone through so many stages of becoming that it has, in the end, become its own entity. I marvel at all the different technologies and hand-sewn skills that are evident in that one copied object, from digital printing to hand dying or sequined embroidery. In the Los Angeles Jobber Market, the divisions of labour in skill and the networks of trust created among Korean family manufacturers have both innovated designs but also cut down on production time, subverting buying structures of traditional department stores that would not originally buy from them. From an Italian economist, I learn that second generation Chinese Italians, having grown up in the garment district in Prato though still denied Italian citizenship, are revitalising old Italian fashion manufacturing houses within the city by forming alliances with older generations of Italian makers. These second generation immigrants and industrialists are looking to find ways to create better designs and more sustainable ways of making. And I am convinced that the big companies whose names and symbols we seem to worship and who take claim in terms of creativity and profit, rely and draw on the failures and creativity that come from these anonymous risk takers from below. Fashion is less the result of corporate innovation or simple ‘trickle-down’ economics in some imagined fashion pyramid and more the result of the innovations made by those at the bottom of the supply chain – the unseen and vanishingly small with their atlases of experience – their successful decisions and sets of negotiations embodied in our everyday clothing.

The anthropologist Anna Tsing describes the blooming of a rare matsutake mushroom from the ashes of a nuclear war, a mushroom that is now foraged after by refugees, war vets, and the undocumented alike in the forests of the Pacific Northwest of the U.S. to sell on the black market for high prices. And in many ways, I have come to understand the global fashion industry in this way – among these landscapes of destruction that have exploited workers and cared little for the environment. These survivors of failure, who have failed over and over again, produce the successful clothing we all wear because they have had no other choice than to persist and change and adapt and innovate as much as the fashions themselves. These bubbling pockets of creativity occur alongside risk and failure, illegality and inequality, hidden and covert as evidenced in the banality of our wearable things. 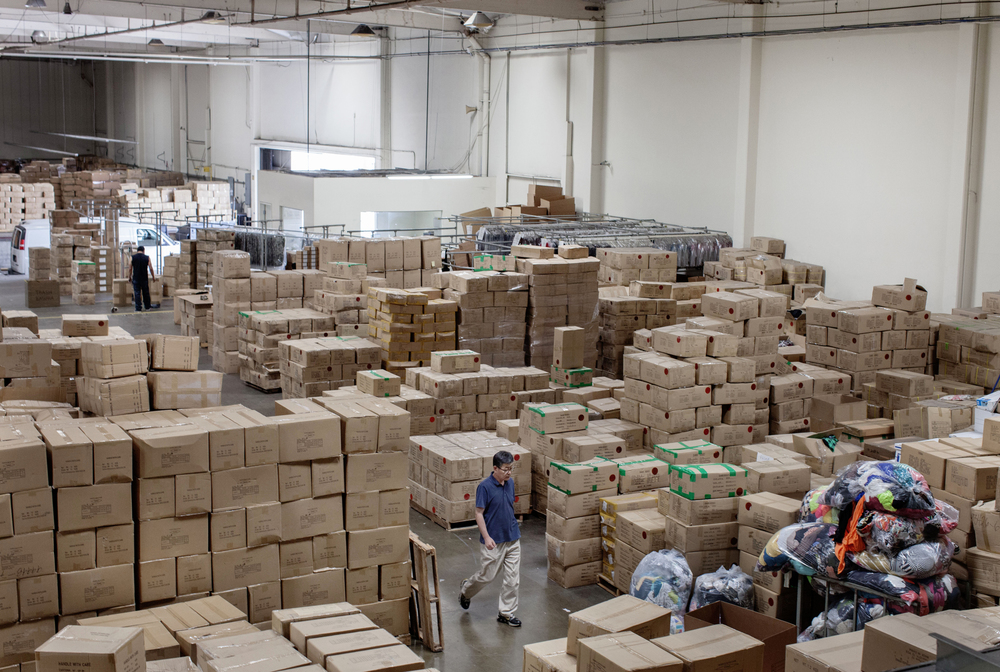 Christina Moon is an assistant professor at the School of Art and Design History and Theory and director of the MA Fashion Studies at Parsons The New School for Design.

Lauren Lancaster is a photographer whose work has been published in The New Yorker, The New York Times and Time magazine. The series featured here is a work-in-progress and collaboration with Christina Moon.

This article was originally published in Vestoj: On Failure.