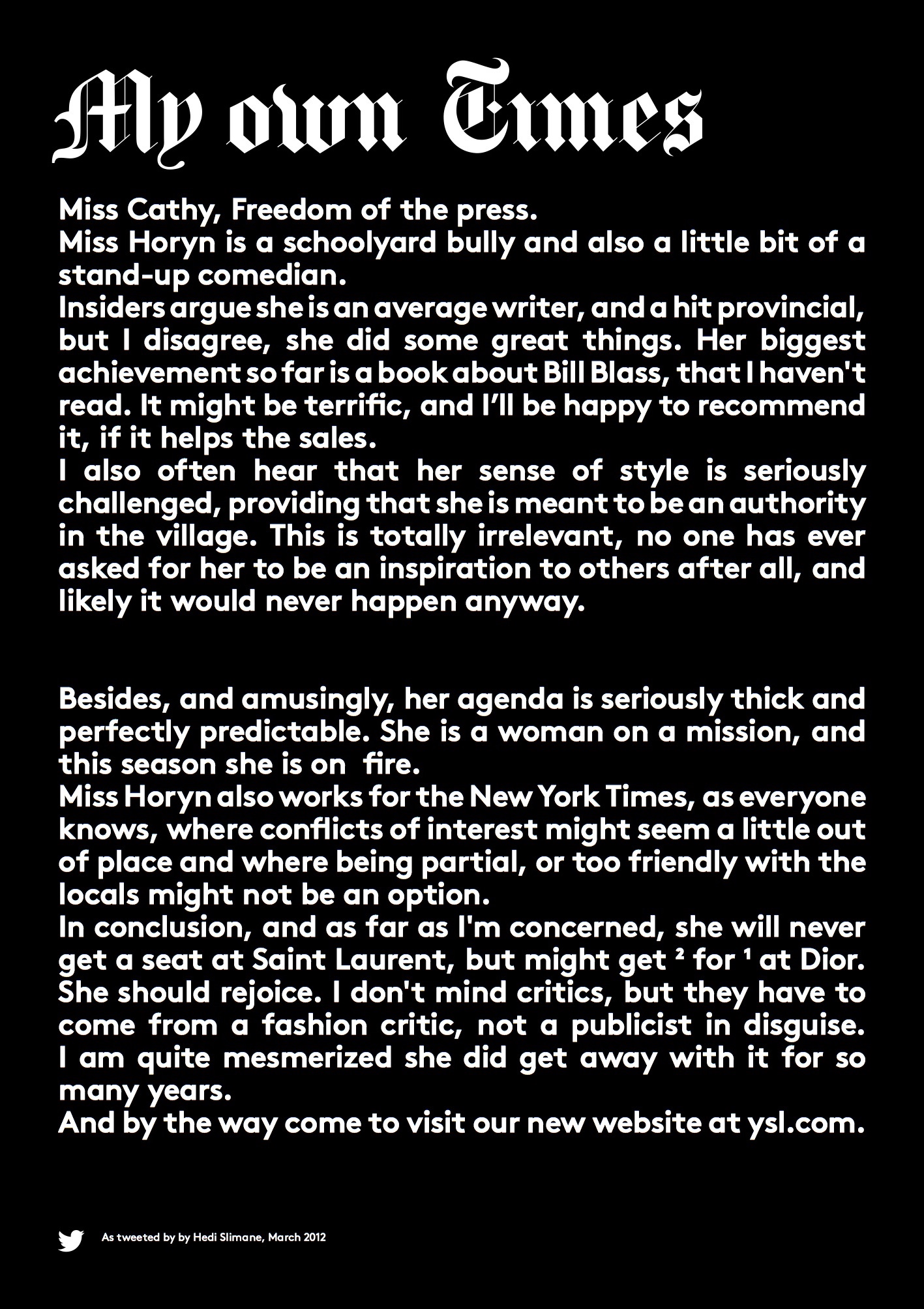 FASHION WEEKS ARE PECULIAR rituals stretched over ever expanding slices of the annual calendar in which fashion professionals prove their worth. They are like the Olympic Games of glamour: designers show off their ability to catch and direct the Zeitgeist, stylists their editing skills, writers and critics their wit in making all this colourful blurb comprehensible for the general public, even when the actual message is little less than the emperor’s new clothes. In this sense, writers are a fundamental part in the whole mechanism, and in fact reading show reviews is a regular and often enjoyable commitment in the self-reinforcing and exclusive routine of attending fashion events. In the morning, right before the action of the new day starts, it is with a mixture of expectation and delight that we read what Suzy Menkes, Cathy Horyn, Vanessa Friedman, Sarah Mower, Tim Blanks, Godfrey Deeney and all the other penmen who have made it to the upper echelons of the industry – for their sharp and insightful views at best, for the weight and circulation of the publications they are affiliated to, in most cases – have written about the previous day’s shows. It might be a way to understand a designer’s message, as in the case of a hardcore conceptual like Rei Kawakubo of Comme des Garçons, while sometimes it is a way of making overtly and perversely obscure references more approachable, as with Miuccia Prada. As industry people delve into these daily offerings of critical flourish, everything is carefully scrutinised: from the length of the paragraph dedicated to any given designer, to the countless ambiguous phrases that force the reader into a game of guesswork as to whether a reviewer thought a show was, basically, good or bad. Reading between the lines is a perilous, if amusing, activity and it isn’t for nothing that every comma is evaluated and every adjective dissected, as if these often hastily composed reports were the offerings of an almighty and ancient soothsayer. Why do we do it? Well, it’s simple: we all – readers and professionals alike – strive for objective criticism, knowing all too well the many obstacles that prevent this utopian ideal from becoming reality.

Fashion houses, and the corporations that in most cases own them, have gained immense power in recent years, not least over the press. These glamorous Goliaths like to flex their muscles, and we, the critics, are constantly reminded of that – by our publishers, editors and by the many PRs and assorted gatekeepers who rule the game in increasingly insidious ways. Fashion, as an industry, survives because of commerce, and commerce is the result of carefully planned media exposure: everything that gets in the way, true criticism in primis, is seen as nothing less than danger, a menace to avoid at any cost. A case in point is the discrepancy between the frank and open, if studious and cautious, after-show talk and what actually filters through to the subsequent written reports. Fashion reporters have become masters of insinuation and understatement, and the subtle critiques that materialise often become nothing but passing frissons – background noise for corporations that have understood the value of column inches.

Like many of my colleagues, I am a freelancer. I would never trade the ability of choosing who to work with for a full-time job, yet as a freelancer my income depends on the pieces I write. In other words, I depend on access. This means that my stock and trade lies in cultivating relationships with fashion houses. These relationships are often based on consideration and frankness, on and off the record, but are not to be confused with friendship, though we are all in constant danger of doing so. Within this foggy frame, it becomes increasingly difficult to keep one’s own critical voice, but having an opinion is what actually makes you respectable, even in the eyes of your foes. Yet, the industry forces us to sharpen our critical tools only up to a certain point. Past that, there’s a wasteland of quandaries. Should I choose to write something that might upset a fashion house, and so sour the gracious relations I have built, I may well lose the opportunity to attend said brand’s shows or to interview its designer, and with it, my ability to do my job dwindles. Navigating the politics of fashion comes down to subtle manoeuvrings: on the writer’s side, about how to express a pointed opinion in a gentle way, and on the designer’s side about how to accept criticism as a stimulus, not as brutal backstabbing. In my career, I have met many designers who openly and willingly accept a bad review, just as I have met many bigwigs who take a good review for granted. Generalising, in other words, is pointless.

The real problem, however, is elsewhere. As a freelancer, I, on a daily basis, witness the strange intertwining of commerce and freedom that is the real poison of the contemporary fashion industry. There is a constant migration and osmosis between fashion houses and editors, writers and stylists, which can translate into some very shady business. Prominent newspaper writing, in fact, sometimes opens the door to the odd, well-paid bit of corporate text, or perhaps a commission to write the press release of the very same show you are supposed to review, which means a treacherous blur of ethical boundaries. A journalist with a sharp tongue and a good reputation might also be hired as a communication consultant for a brand, which makes things even trickier, ethics-wise. Similarly, on-staff magazine stylists often consult for fashion houses in more or less transparent ways, and editors know when to look the other way. Independent magazines often double up as communications agencies, allowing their publications to act as calling cards for their good taste and access while their mercantile liaisons wither away any potential to critically examine the business. Lavish press trips – all-expenses-paid voyages to far-flung and exotic locations in order to review a pre-collection or special event – are another perk of the job. Though nothing is clearly expressed in terms of expectations, it is highly improbable you’ll read much in the form of criticism afterwards. Our mild and gentle opinions are somehow secured with business class tickets and five-star hotels, and with the promise of a continued membership in fashion’s hyper-exclusive clique. Fashion is perilously seductive: it makes a five-star luxe lifestyle available to every top-class insider, even when they live on the dole. You get spoiled like a superstar, and the temptation to engage in foggy ethical deals can be overpowering. Moreover, as a system fashion has the unique power of turning an enemy into an ally – just think of the way bloggers, in just a matter of years, passed from being independent voices to trumpets of the most blatant and banal product placements. The fashion industry is a game in which we all play a part. Even this story, published in this magazine, is part of the very same game, whether the upshot is an editor relying on my voice to express frustration, or in providing me with an outlet in which to convey myself differently. We all want exposure and the power that follows, and en route we are rewarded with all from freebies to the admittance to a famous designer’s sancta sanctorum. Yet, the closer and more friendly you get to a house or a designer, the more difficult it becomes to compose an honest commentary.

Today fashion journalism is turning into, at best, decorative fodder or, at worst, astute product placement. Magazines no longer depend on newsstand circulation for their income, banking instead on advertising pages to pay for production and staff salaries. What’s more, the luxury industry also underwrites most newspapers today, yet staff members and editors-in-chief often overlook fashion, framing it instead as ancillary, secondary material. The frustration that this breeds in the many journalists who devote their time and wit to fashion is understandable, and an argument could be made about how further compromises to our code of conduct stem from it. The ubiquitous street style photographers outside fashion shows, for instance, are creating niche celebrities of behind-the-scenes professionals, and the shrewder among my peers often use their personal Instagram feeds or other social media channels for undercover advertising. In return they are rewarded with the latest threads as gracious thank-you cadeaux. This may seem harmless at first but the pervasive and shady influence that allows a journalist – and supposed free thinker – to be paid by a fashion brand to wear its clothing erodes not just the confidence our readers have in us, but also undermines progress and development within the industry at large. Another element worth mentioning is that we, the critics, are made of flesh and bone: we are not machines, and sometimes we fall in love – professionally speaking – with a designer. Excessive praise could lead to a perceived loss of integrity in the eyes of our readers, and the fact is that we sometimes simply make mistakes. However, as long as the industry overall is perceived as non-transparent, even simple mistakes make us all seem guilty.

That the contemporary fashion system discourages all forms of criticism is becoming painfully apparent in the cultural wasteland we have before us. Fashion today is mostly about communication, and instead of design innovation we have an endless postmodern pillage of old ideas, haphazardly reshuffled as new products in need of new marketing campaigns. True fashion criticism goes hand in hand with progress, because it’s only through questioning and debating that new solutions
and new scenarios are created, and that movement is ignited. But this aspect is in constant danger of being silenced: sometimes with big dictatorial moves (removing ads from a publication being the most blatant), sometimes through more subtle pressures like denying a reporter access to a show or a stylist the chance to borrow clothes for shoots. So let us not forget that criticism is an indispensable act, and an opportunity for any industry for self-questioning. Believing that everything is rosy while things crumble around you will only help accelerate the fall of the Empire – though that may well be what we need in order to start again. If the odd bit of criticism that we are allowed can ignite a reboot, we’re off to a good start.

Angelo Flaccavento is a fashion writer and regular contributor to The Business of Fashion, L’Uomo Vogue and Fantastic Man.

This article was first published in Vestoj On Failure.