TODAY’S BERLIN – A MECCA for creative exiles – bears little resemblance to the not-so-distant reality of the German Democratic Republic. Aspects of Soviet architecture and sections of the wall remain, but many of the representations of East German fashion culture from this period have evaporated since the fall of the wall in 1989. Prior to this time, fashion in the East was subject to government approval, imposing restrictions on quantity, quality and creativity on the dissemination and consumption of garments. The state-sanctioned German Fashion Institute (established in 1952 as The Institute for Clothing Culture) maintained its official ‘Fashion Line of the GDR,’ which distributed garments throughout the country. Within this regime, designs were first made on a smaller scale and subsequently worn by male and female models appointed by the state as a means of product testing and promotion. In addition to designing, producing and distributing garments in state-owned stores, the German Fashion Institute attempted to establish East Berlin as a post-war fashion capital by hosting fashion shows. Later, the state orchestrated educational campaigns, sustained archives, published writings and monitored media to ensure their socialist ideal was maintained.1

For individuals in East Berlin, using fashion for self-expression risked being seen as subversive. As such, attire was purely practical: garments were designed to be functional and durable. Material shortages meant that those individuals choosing to sew their own garments had to be resourceful, with some opting to deconstruct pre-loved garments in order to make new outfits. Despite the German Fashion Institute’s efforts to maintain control, creative fashion was happening on both sides of the wall, with a niche counter-culture movement spanning the early 1980s to November 1989 with the unification of the city. During this time an innovative community of designers who were living in virtual isolation from the outside world, began to create cutting edge couture from found materials and industrial textiles, offering freedom within the bell jar of a socialist state. 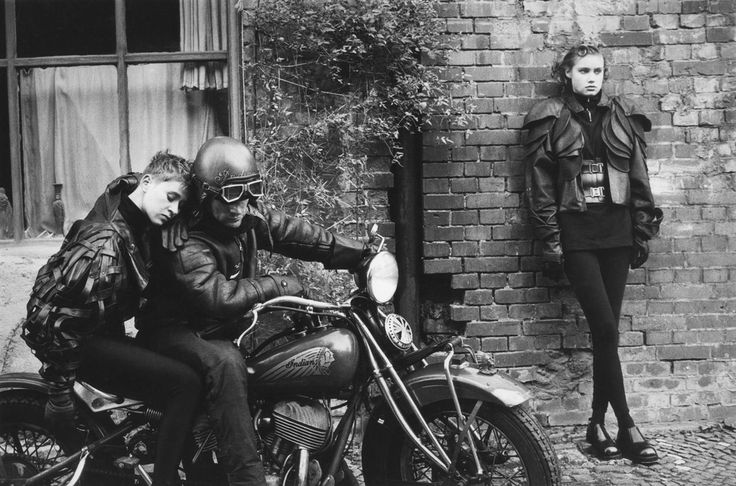 This fashion movement, characterised by a hands-on approach and aesthetic, is celebrated in the 2009 documentary ‘Comrade Couture.’ The film’s director Marco Wilms, who grew up in East Berlin, features key figures from the scene, like fashion designer Sabine von Oettingen, stylist Frank Schäfer and model Robert Paris. They formed members of the subversive East Berlin fashion groups ‘Chic, Charmant und Dauerhaft’ (CCD, Chic, Charming and Enduring) and ‘Allerleirauh’ (All-Kinds-of-Fur), and created ostentatious collections that were showcased in illegal ‘fashion theatre’ performances. When speaking about her start as a fashion designer in an interview, Sabine von Oettingen explains that, ‘It all started in connection with the first fashion shows in the early Eighties in East Germany. The shows began in youth clubs and living rooms but soon grew, taking place in abandoned churches and decommissioned bathhouses.’ Collections designed by von Oettingen contained elements of the New-Romantic style popular in London and New York, yet the East Berlin interpretation was altogether different to its Western counterparts. Many of the most eminent CCD pieces used unconventional materials, such as erdbeerfolie (gardening foil) and eingeweidetüten (hospital organ bags) in the absence of traditional dressmaking fibres. In the documentary, the textiles resemble a glossy lamé; silhouettes are sizable – indicative of the 1980s – but the puffed shoulders and expansive headpieces have a more future-noir feel, and wouldn’t be out of place in the wardrobe of Rachael, from the dystopian film ‘Blade Runner.’ Von Oettingen and other members of the group were directly rejecting the mainstream through their subversive garment construction techniques, ‘It takes pure passion to go on stage and present clothes as self-sewn, knitted, glued or otherwise bound together. With every appearance the make-up became more extravagant and different – we liked changing things because repetition is boring,’ continues von Oettingen.

Using non-traditional materials was imposed by necessity, but von Oettingen and her contemporaries embraced the challenge. The original collections created by these groups are now recognised as valuable historical artefacts, and are archived in the cultural collection in the German Historical Museum.

Another relic from this era, also included in this important cultural archive, is the fashion magazine Sibylle. Celebrated by audiences and permitted for circulation within the culturally controlled state, the print publication became a forum for fashion culture and commentary in the East. Established in 1956, the publication was edited by German fashion journalist Dorothea Melis and produced within the political conditions of the GDR. The highly influential magazine had a colossal following and featured extraordinary photo essays, depicting models in urban and rural East Berlin landscapes. As the garments shown in photo spreads were often unattainable due to shortages, each issue of the magazine would include a sewing pattern, encouraging a DIY approach by enabling readers to recreate the designs on the pages themselves. In an interview, Wilms highlights the intent of the magazine, ‘The most important aspect of that magazine was that it created a world of beauty and mystery, an intellectual world. It was not about selling clothes – it was about creating a bohemian world, Sibylle was really hip, difficult to get, and people really liked reading it because they had articles about writers, photographers and literature. The photographers – Sibylle Bergemann and Ute Mahler – created a parallel universe in the GDR.’2

Copies of Sibylle are even harder to come by today, but this critical time in East German fashion is reaching wider audiences. Berliner Chic: A Locational History of Berlin Fashion3 is a collaborative book project between Professor Susan Ingram and PhD student Katrina Sark. In an interview Sark explained to me how the subterranean style of East Berlin during the 1980s could not survive in a unified Berlin, ‘The impact of reunification is that there is no East anything left, let alone fashion.’ Following Die Wende (the change), Western consumer culture became readily available, which made it unnecessary to create one’s own clothing. Twenty-five years on, the former East of the city now houses conglomerate brands including Louis Vuitton and H&M. ‘With reunification, affordable living standards and the flood of creative talent to Berlin, the fashion industry re-emerged from the divisions and fragmentation into a fast-growing creative economy that is now attracting international attention,’ affirms Sark. In Berlin’s changing neighbourhoods, independent ateliers crop up between established boutiques and tailors. The East Berlin fashion movement has dispersed, but the spirit of their work remains embedded in the fashion identity of the city.

Melisa Gray-Ward is an Australian writer living and working in Berlin.