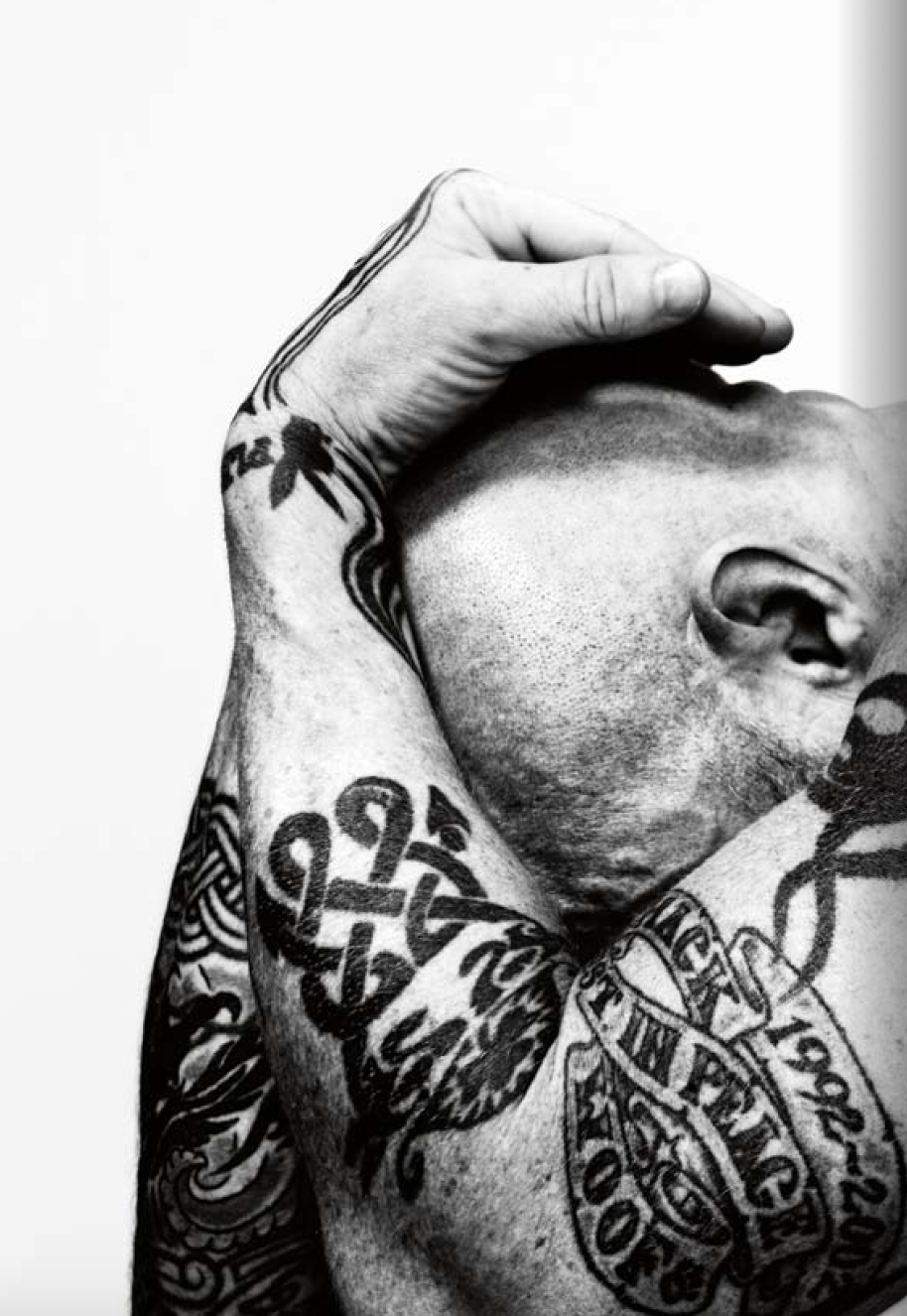 Known as ‘the hunk with a pussy,’ Buck is famous for his ‘red-neck’ masculine appearance which is in stark contrast with his below-the-waist anatomical detail. He coined the phrase ‘It’s not what’s between your legs that defines you’ and the erotic potential of his films all stress that gender performance exerts as much sexual allure as what is (or is not) between the legs. Many of us, who have often felt quite secure in our sexuality, have been amazed at how Buck’s performances can be a solvent of our sexual identity. I certainly won’t have been the first gay man to have been turned on by Buck’s films.

When Buck arrives, he’s extremely friendly – beaming an ear-to-ear smile of perfect, white teeth, gleaming beneath his auburn facial hair. To have a conversation about shame, with a man who claims to have no shame, might seem a daunting task but Buck was happy to talk frankly about anything from trans politics to his own particular performance of hard masculinity. 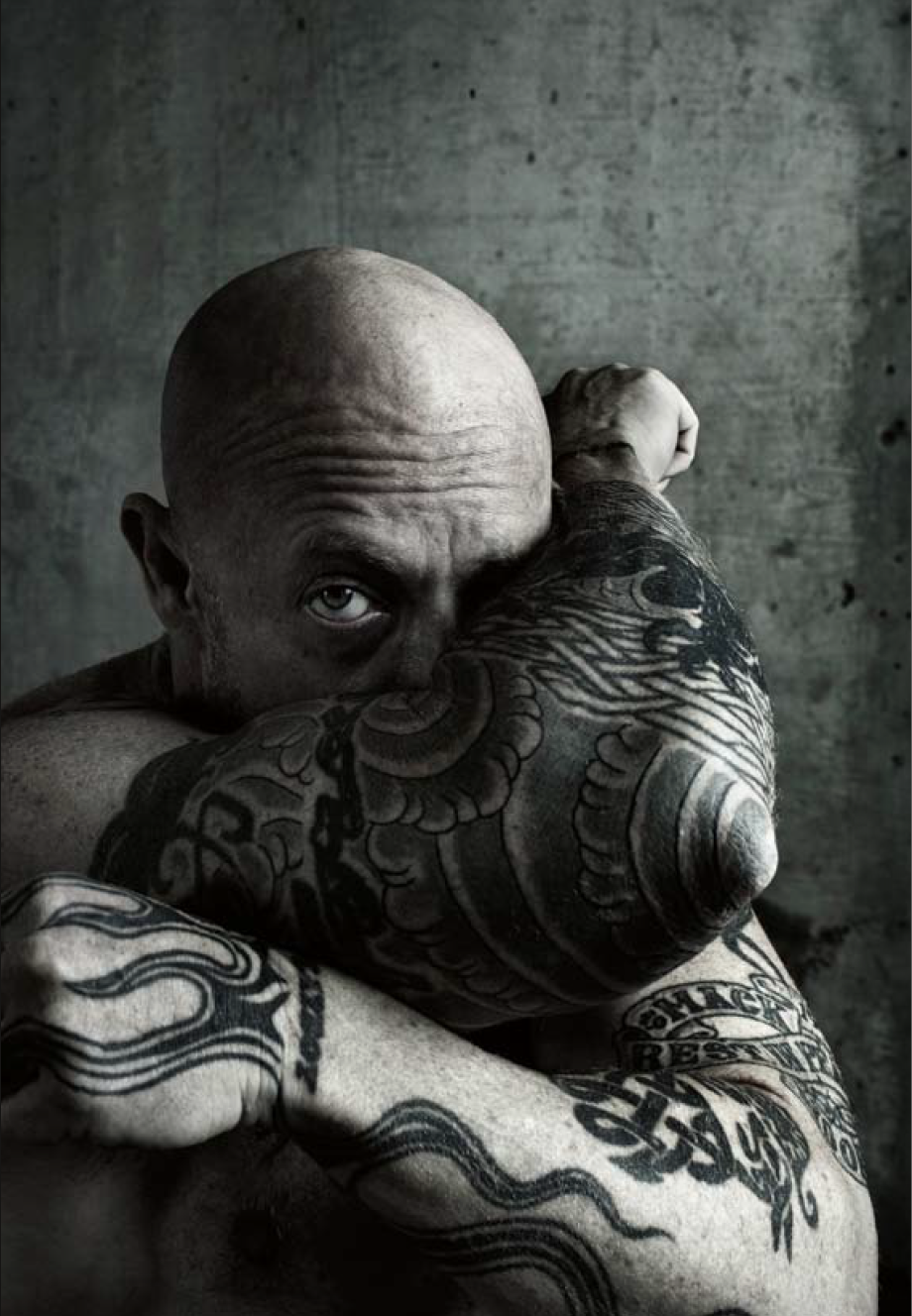 Buck Angel: It’s interesting you use ‘shameful’ as I felt more shame when working as a fashion model than I do working in porn. But then, I have no shame. Modelling was something I never aspired to – I really was put into it. Believe it or not, I was simply discovered on the street and really only followed through with all the opportunities as a dare. In modelling terms I was actually quite old – 26 – but I was very successful and made a lot of money from it. I could well have been a supermodel (although the term didn’t exist at that time) as I was very influential in promoting the popularity of the androgynous look. However, it just didn’t feel right. I didn’t want to be a pretty woman; I wanted to be a handsome man.

Niall: That story really emphasises how important it was for you to change sex. Many people would think that because you’re told by all of society that your body is beautiful, and you’re able to make a livelihood from it, that you’d be happy to just accept it. But obviously you weren’t.

Niall: And what is your message?

Niall: Perhaps a big difference is that your representations emphasise Buck Angel’s sexual pleasure rather than sensationalising a ‘freak’ body? Your work is not ‘enfreakment’ or a freak show.

Buck: Yes. It’s sexual pleasure for Buck Angel. But in that respect I always try to stress that I am an individual first and not a representation or ambassador for a specific community.

Niall: Ah yes, do you find that you’re made to bear the burden of representation?

Buck: Yes, I often find myself inspiring controversy from the trans community because of the things I say. Recently, I’ve been accused of being fat-phobic because I’ve cautioned FtM transsexuals about the need to take care of their body, especially when they’re introducing testosterone into their system. As you know yourself from weight training, if you don’t exercise and watch your diet, all that extra testosterone can cause the body to put on fat.

Niall: It would be like doing a steroid cycle and not training? I see that all the time and guys just turn to flab.

Buck: Exactly. And I’m not being fat-phobic when I warn FtM transsexuals about that – I’m simply stressing the need to take pride in your body. I always have a sense of pride in my body and always take care of myself.

Niall: Well, let’s talk a little more about the response from the trans community.

Buck: A lot of things have changed in trans politics. In my day, we transitioned to become men – to identify as men. We didn’t even have the term ‘cissman’ to describe someone who has maintained his birth sex; we used ‘bio-man.’ One big difference nowadays is that we now find people who are transitioning so that they can identify as ‘trans.’ That ‘trans’ is an identity in itself. That’s fine but it’s just not my politics. 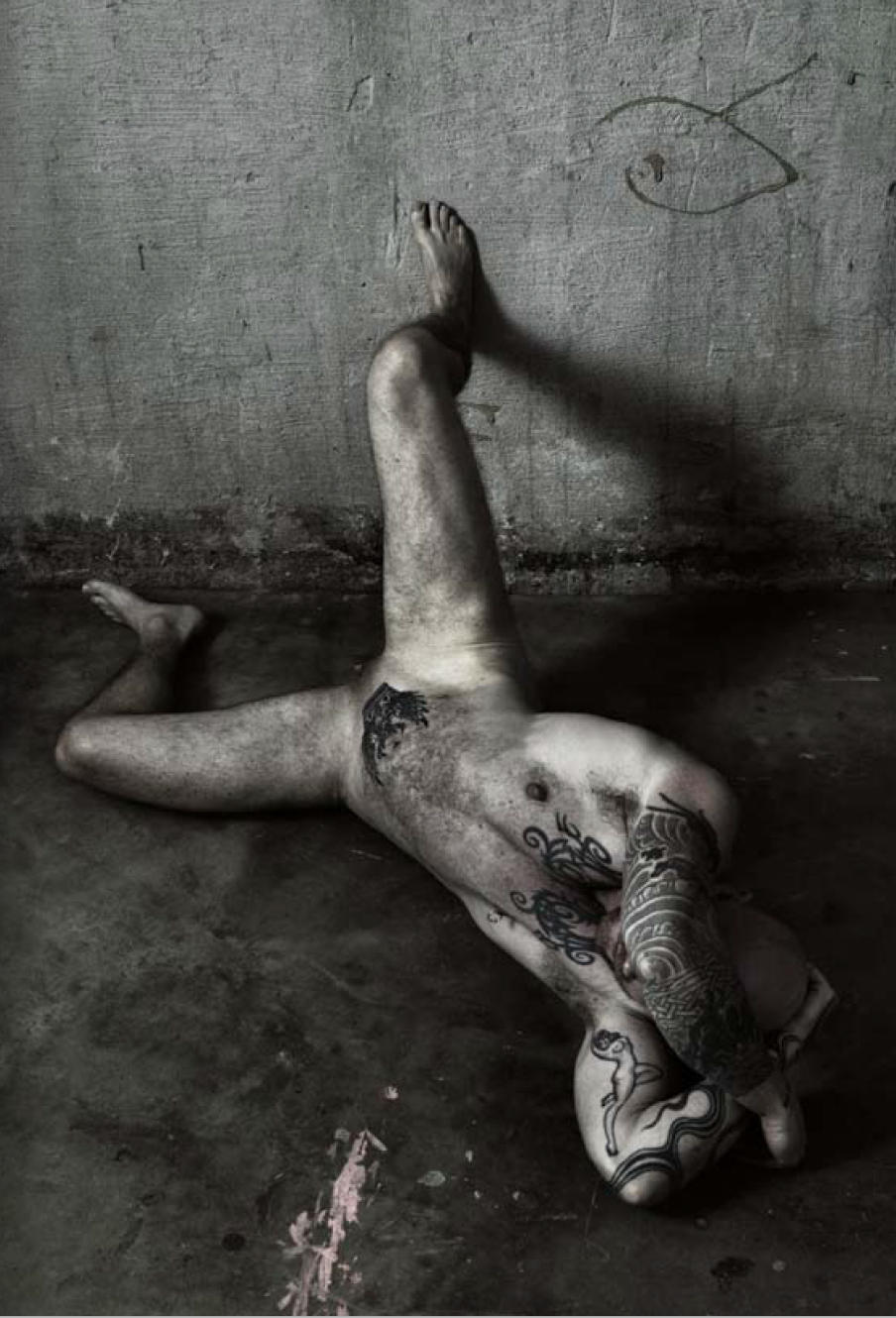 Niall: And do you think that trans politics could possibly be accused of asking too much of the everyday person? For example, many trans people now prefer to use the pronoun ‘they’ instead of ‘he’ or ‘she.’ I can understand the political agenda of doing that but in everyday conversation that can make things rather difficult?

Buck: Exactly. It’s like trying to reinvent the language.

Niall: And for everyday people, who don’t have degrees in sociology or rhetoric, that can be asking a little too much.

Buck: Indeed. My agenda has never been to reinvent the whole system but simply to show that you should love yourself and take pride in yourself and your sexuality – whatever it is.

Niall: And to me that’s something you do very well. I think one of the first times I ever saw you was years ago, when I was a postgrad student and you appeared on This Morning.

Buck: I loved that interview I really felt I had a chance to do something positive.

Niall: This Morning was a very popular show and would have reached a huge audience at that time. I remember being very impressed by the way you talked about trans issues so matter-of-factly.

Buck: Yeah, I always try to be calm and respectful. It doesn’t help to be aggressive.

Niall: Well certainly looking the way you do, it wouldn’t help to be aggressive. I should think most people find your look intimidating enough!

Niall: So let’s talk about your look then, your iconography. It’s obvious that you have a respect for masculinity – and a particular type of masculinity. You’ve been described as having a ‘red-neck masculinity’ by media scholar Katrien Jacobs or, in our British context, as representing ‘hard bastard’ masculinity.

Niall: But it’s a particular type of masculinity in that it’s particularly classed? In Britain we would simply call it ‘working class’ masculinity. In the US you’d probably use the euphemism ‘blue-collar.’ Why that particular iconography?

Buck: My father. He was big influence on me. He was a working-class, blue-collar – whatever you want to call it – rough man. For me, that has always symbolised masculinity. Another influence on me was the imagery of Tom of Finland.

Niall: And you’re very much settled on that particular style?

Buck: Yes, I always wear boots, jeans, t-shirts. I don’t think I’d ever wear a formal suit – unless, of course, I had a special occasion which really demanded it

Niall: And what about your tattoos?

Buck: Actually, those had started before I transitioned.

Niall: Were they perhaps some sort of rebellion against the expectations of the fashion modelling world? 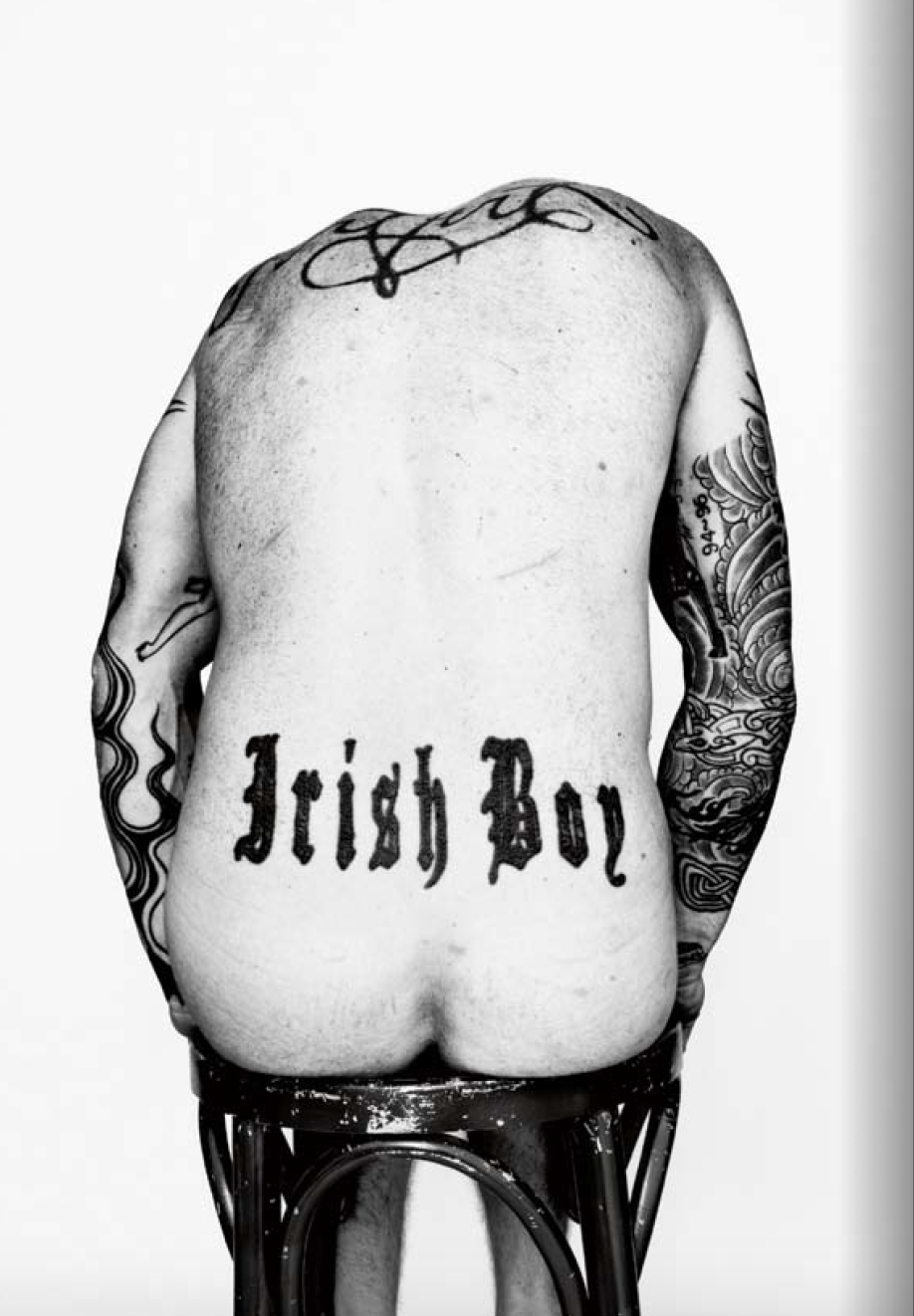 Buck: Mmmmm, I don’t think so. I think they were more about claiming my own body, demonstrating ownership of my own body.

Niall: It’s interesting that it’s when people often feel their life is most out of control that they like to demonstrate control of their body. They might not be able to control their lives but they can control their bodies. And what about your facial hair?

Buck: Very important for me. A symbol of masculinity.

Niall: In that respect, what do you think about the current fashion of middle-class boys emulating tough, working-class fashion? I suppose the main example at the minute is wearing the beltless jeans which all fall down because this was how people held in the police cell had to wear their jeans when their belts got confiscated.

Buck: I think everything you wear should flatter your body. You should never wear something because it’s cool and hip. For me, clothes are never just fashion but about asserting your individuality.

Niall: Again, it’s this idea of taking pride in yourself and what you do?

Buck: Exactly. It’s about working with your own body.

Niall: So for you sexuality is definitely built upon gender – the body’s style and performance?

Buck: For me, yes. But sexuality is a wide continuum. I hope that that’s one of the things my work shows: that you should be OK with your sexuality. It’s not about shame; it’s about pleasure. 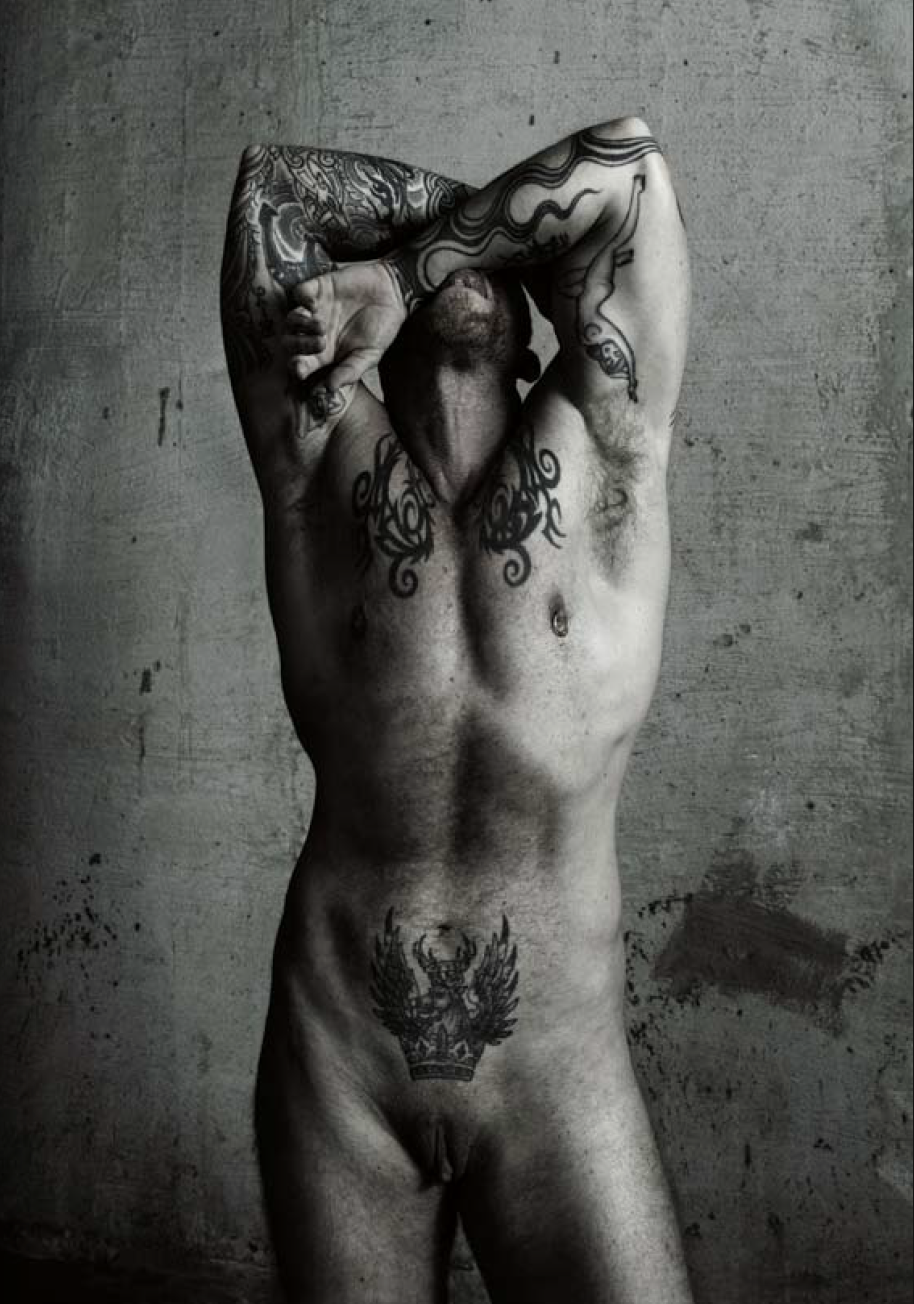 This article was originally published in Vestoj On Shame.

Dr Niall Richardson is a researcher, author and Senior Lecturer at the University of Sussex.

Christian Coinbergh is a Stockholm-based photographer who works in fashion and art.