LUCY MCRAE IS A designer and filmmaker, and self-titled ‘Body Architect’ working with the boundaries of the human body and the dynamism of technology. Beginning her career in the innovation department at Philips in Eindhoven, The Netherlands, she now runs her collaborative studio out of London. Best known for her innovative projects (particularly with Dutch designer Bart Hess), McRae works with the plasticity of technology for the body and how we engage with it aesthetically as well as functionally. Her work intermeshes and bleeds into fashion processes and practices with an altogether novel and unchartered approach.

McRae’s work often engages with the fashion industry, such as her collaboration with Bart Hess and Nick Knight on a shoot for Another Man in June 2010, as well as working with the likes of SHOWStudio, American Vogue, Levi’s and Bernhard Willhelm among others. Playful, sculptural, innovative, but at times dark and disconcerting; McRae works at the edges of the body and its image. In one such project, she developed a ‘Swallowable Parfum’ that the ‘wearer’ consumes in order to apply the scent that is excreted over the body through perspiration. 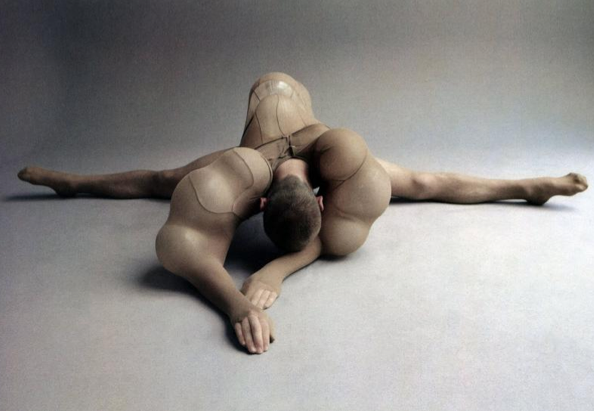 Claire: How do you see the evolution of the human body and its adornment considering its increasing amalgamation of technology – for instance bio-sensitive software or ‘body-tech’?

Lucy: There is so much going on in wearable technology; I’m looking at what comes after this. I recently met with NASA’s Space Biologist, Lynn Harper and she talked about how our bodies are inseparable to the environment we live in; the proteins in our body adapting minute to minute responding to the situation around us. There is a constant connection between the environment, architecture and the body; a really interesting trio between the three. I’m interested in redefining the limitations and boundaries of the body. My new project is exploring how the body will evolve – or potentially devolve – in altered gravity environments. I guess you could call it ‘life after wearable technology’. When you’re in zero gravity environment it’s like you’re underwater, so the body’s biological choreography is constantly changing. A lot of my projects are steered by complex scientific challenges; the narrative and concepts are borne from here, then I create these worlds in film.

My pursuits are not to predict the future. I use my work to project society and the evolution of humans into the future and wrap in a technological membrane. I call myself a ‘body architect’. Its a fabricated job title that won me a dream job at consumer electronics giant Philips eight years ago. The name stuck and has created an open platform, where I can explore and experiment without any preconceived ideas or expectations. 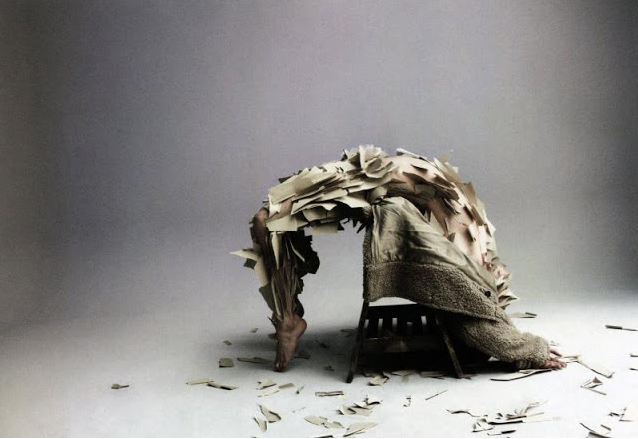 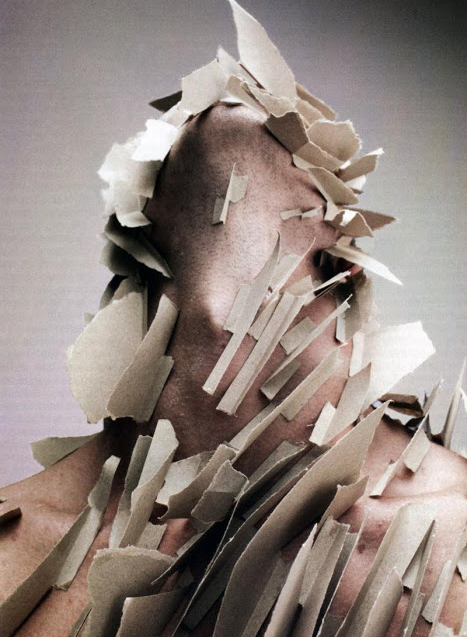 Claire: How important is collaboration to your work?

Lucy: I love to collaborate – I think if you work with people from different backgrounds, it brings a different energy and enables you to move forward expanding your capabilities and learning from others. It’s a big challenge and important that I work with people that complement my skills. When you can have a successful collaboration, it’s a wonderful capturing of energy.

Claire: You are often featured in fashion magazines, for instance your work with photographer Nick Knight for Another Man in 2010, among others. How does your work fit in with traditional fashion processes, and how does your studio practice engage with the fashion industry?

Lucy: My projects are always loosely related to fashion. I’m not in the fashion world, but strongly believe we have entered into a future of the hybrid. I think we’re always swarming in other people’s research and I like that it’s blurry and not clear-cut. Different people interpret my work in different ways; when Bart and I started to do Lucy & Bart, it was very much misunderstood. People thought it was gross and grotesque, there were these wonderful, critical comments, like ‘this isn’t fashion’. Two years later people started to get it. I like the fact that we were hunting further ahead of our time, that it was misunderstood. 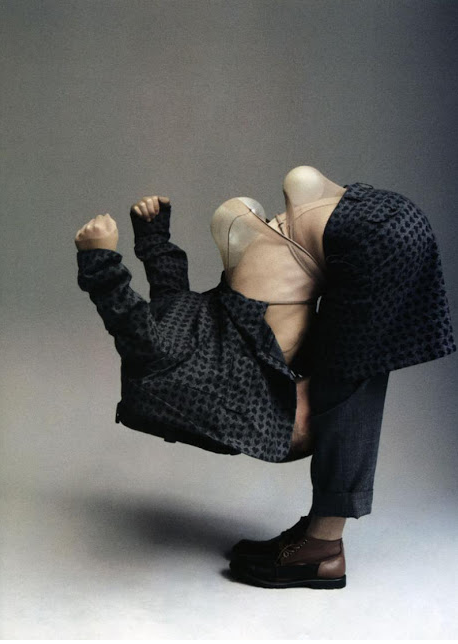 Claire: Is this a realm you consciously engage with?

Lucy: I’m interested in the concept of the second skin, and using the skin as a canvas to propagate innovation and the body is always the starting point. My short film ‘Make Your Maker’ looks at how technology is absorbed trans-dermally and excreted through the skin. If we’re talking about the body, then we refer to identity, which is a direct link to fashion. All these aspects weave into the body, so when I do something I’m not trying to make a statement about a certain area, it’s more an enquiry, using my work as an antennae, in response to whats going on around me.

Claire: Do you then work with a potential in mind to expand on or improve aspects of fashion and the ways in which we engage with it?

Lucy: Well, for the Swallowable Parfum, I took the concept that in fifteen to twenty years time we will be able to reprogram our biology away from disease and ageing. The product takes the form of a cosmetic pill that you consume and the fragrance excretes through the skin’s surface, redefining the potential of the body and giving a new function to skin. For Swallowable Parfum, the body becomes a sort of atomizer; expanding from the inside to the exterior of the body, emitting a cloud of scent around the silhouette. 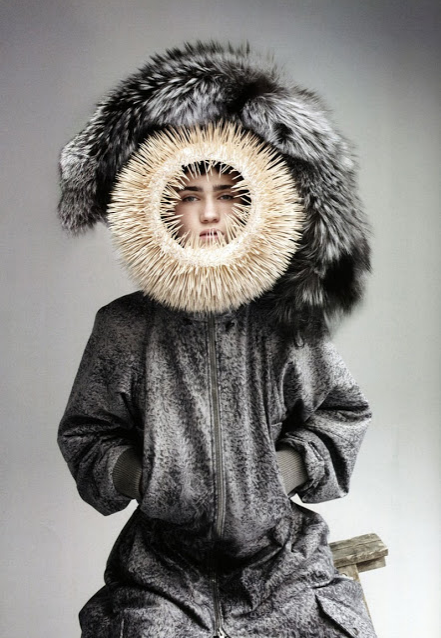 Claire: Your work obviously spans many disciplines, from architecture, science and sculpture to fashion and technology. How would you describe your individual, idiosyncratic style that lies at the core of all this?

Lucy: In a weird way many of my projects, unconsciously, come out quite dark and visceral. For example, ‘Make your Maker’ was filmed in an Amsterdam basement and it sort of brought in elements of death. With my work I never know what it is going to look like in the beginning, the experiments and processes eventually define the final outcome. In the past it has been described as ‘grotesquely beautiful’. And that is certainly not what I aim to do in the beginning, but it just happens due to do the materials I work with. It’s often a very biological process. I am taking the viewer into another world, hovering in an atmosphere not yet real. That’s what really excites me: dreaming up these possibilities. 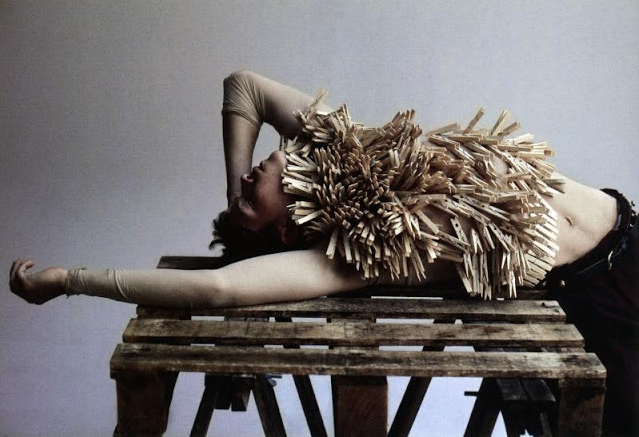 Claire: And what about the idea of a cyborg, that we as human beings are increasingly merging with technology? Is technology increasingly becoming a second skin?

Lucy: I think that it is important that technology is organic and inclusive. I like to explore high-tech scenarios, but I use very low-tech ways of presenting it. Technology is becoming increasingly smaller, and will come in liquid form. We’re going to bathe in it, swallow it, eat it, wash our hair with it. I treat technology as a membrane and I treat the skin as a canvas for technology. 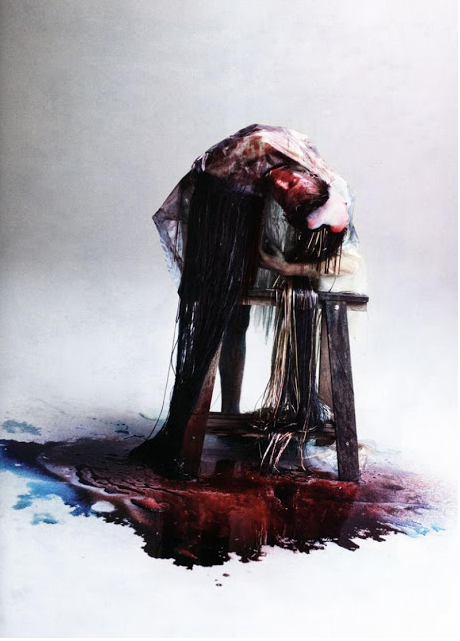 All images of Lucy McRae and Bart Hess’ collaboration with photographer Nick Knight for Another Man magazine, 2010.

Claire Van Den Berg is a writer and editor based in Berlin.