IN THE FINAL INSTALMENT in the series of forces in art, theatre and fashion we turn our attention to the phenomenon of the ‘explosion’. In opposition to water – the origin of earth, fire is its antagonist, with a force to destroy and to leave an empty surface where there once was life. In order to be reborn, we must let destruction in; only therein can we create ourselves anew.

The physical presence of explosions are at once catastrophic and annihilating, yet utterly fascinating. Perhaps it is exactly these qualities and beliefs, those of the apocalypse and the end of the world that deliver us equal fear, equal calm. In striving to create something new, we must not be afraid to obliterate the past. 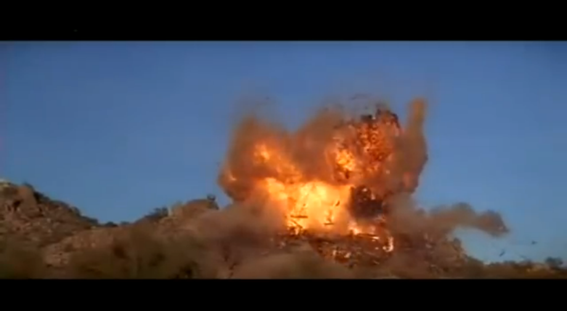 ‘Scars of damage and disruption are the modern’s seal of authenticity; by their means, art desperately negates the closed confines of the ever-same; explosion is one of its invariants. Anti-traditional energy becomes a voracious vortex. To this extent, the modern is myth turned against itself; the timelessness of myth becomes the catastrophic instant that destroys temporal continuity.’

‘If you could record an explosion with a high-speed camera that takes one thousand images per second, for example, you’d see a thousand pictures. If you hung them up you’d see a thousand different sculptural forms. Crazy! The form changes constantly. So much is happening. So much happens in a thousandth of a second. Yet the explosion is the opposite: there’s a bang, and then it’s done.’