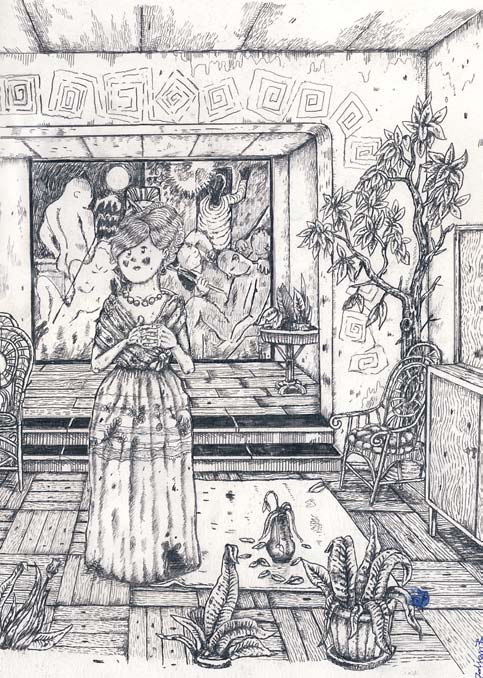 IT’S FEBRUARY 18 1960. Jean Cocteau has just released his film ‘The Testament of Orpheus’. Mme Francine Weisweiller is in it, just a small part, but important nevertheless. Mme is not an actress but the aging poet’s best friend and she plays ‘la dame qui s’est trompée d’époque’ or, in translation, and I fear less smoothly, ‘the woman who found herself in the wrong decade’. Janine Janet, the creator of Cristóbal Balenciaga’s surreal window displays, is the costume designer, but Mme wears a trailing white dress by Balenciaga himself, which she paid for. Instructed by Cocteau to take his inspiration from Claude Monet and Sarah Bernhardt, Balenciaga produces exactly what suits Mme best and into the bargain doesn’t sully his reputation. Cocteau describes Mme’s appearance as a ‘live phantom of flesh and bone’.

Mme Weisweiller (née Worms, born in Brazil to a French Jewish family) is the daughter of money, and the wife of Alec Weisweiller, who keeps racehorses. Cocteau has been living at Santo Sospir, Mme’s Mediterranean holiday villa in Saint-Jean-Cap-Ferrat, since 1950 when they first met. She invited him to stay for a few days and he has been there for a decade. His serpentine doodles cover every wall in the house, like snail tracks. Cocteau has three years to live. He will leave in 1963, after a terrific row, and die before they have time to make up.

It’s 1960. Mme is making plans for her daughter Carole’s eighteenth birthday party. Janine Janet is to create magical unicorns decorated with silk rose petals and artificial flowers (which later pop up in the royal box at London’s Covent Garden – an early case of recycling). Mme has to decide what to wear. The dress she orders from Balenciaga, who dresses both, as is the wont in a France rich with sartorial heritage in a time and class when daughters still wanted to look like their mothers. It is as delicate as a shell; beribboned, chaste, and takes some liberties with historical dress.

Given that I have never met Mme, it would be presumptuous to guess what she thought when she commissioned it. The milkmaid fichu and slender skirt has a touch of the Marie Antoinette about it, with its tiny pink ribbon work roses, cream lace florets, delicate beadwork and matching buttons wrought by Lesage. In documentary evidence1 I can see the fichu wraps snugly across Mme’s torso, like a shawl, and stands proud of her neck at the back. I can see that her fair hair is beautifully coiffed and that she wears a string of pearls as big as marbles, with a jewelled pendant that makes her neck seem very frail. The skirt poufs out a little around the waist, a trademark Balenciaga touch to conceal any slight swelling of the stomach. Her daughter hovers closely by her side, in a fuzz of white organza.

It’s 2010. I observe Mme’s very dress, sprawled flat on a table before me. Let me make this as objective as I can. Its pale pink organza is still crisp, its delicate embroidery still fresh, its ribbon roses still pert but… It’s ruined. We have ways of knowing when a dress is worn – a little smoothness here, a few crinkles under the arms, a little stain or two. But never has a garment been so disfigured by a stain in my many years of searching for meaning in the name of fashion.

It seems unholy to dissect the dress without a surgeon present, but let me perform this autopsy alone. Undo the tiny hooks, the fused poppers, and lift to each side the fleshy flaps of the fichu. Here’s the heart of the dress – it’s a place only meant to be seen by Balenciaga’s finishers, and Mme’s maids. Its organs are pale and boneless. The interior is formed in limp pink silk, visible through the organza, and gives the dress its overall colour, like a cooked shrimp. The inner dress has tendril-like shoulder straps and is fastened with hooks and eyes at the bodice front – making my fingers fumble – and then with a waist belt of pink silk, also fastened with hooks and eyes. There are eight suspender attachments connected to the waistband, like squid.

Let us place the following in context – Mme is wealthy, always fashionably dressed, but not a slave to fashion. She dresses on her own terms. But what on earth was Balenciaga thinking of? He sculpted moulds for dresses and chiselled many a matronly form, he chose firm colours, not delicate floral patterns and darling buttons (although if you want to get technical, the same little embroidered motif turns up in the collection dresses of 1960). This is a Dioresque dress, for a spring fête. But Mme is such an important client that Balenciaga will do anything for her, even take instructions from Cocteau and even make a birthday dress.

I forget myself – this is an essay about magic, about stains, not a commentary on power. And that great dark stain didn’t just appear by itself, it arrived, from a height, and at an angle and with the speed of a stabbing (the dress still shrieks with disdain). If I were a forensic scientist I could mark exactly where the coffee cup (I jump to conclusions) was poised, exactly the tilt at which, once jogged, Mme’s hand lost control, for let’s solve the mystery of the stain with logic. The obvious explanation is that on June 24, 1960, someone at the birthday party walked backwards, alarmed by the unicorns, and knocked the porcelain coffee cup from her hand soaking the fine organza and sullying the perfection of the dress, the epitome of haute couture, forever.

Whatever happened, it was ruined, but not thrown away – perhaps for sentimental reasons. It was 1960, the year of the glorious Testament of Orpheus, its mysterious landscape peopled with fantastic bestiaries and magical persons, and it was the year of the birthday party. Later, after the row, but not because of it, the family gradually lost everything, the house, the collections of art. Forty-six years go by. The dress goes into an auction in London – we spotted it across the room – it wasn’t expensive – it was ruined.

The museum has it now, it’s been given an identity number to add to the terse labels lodged inside like calling cards (Balenciaga, 10 Avenue George V, Paris. ‘72814’ hand written on a tape secreted behind). What more can I tell you? It’s hung in a white metal cupboard, swathed, motionless, flattened and hemmed in by other Balenciaga dresses that abhor it. It’s in an airless and windowless room, at the heart of the museum, without flesh and bone to fill its body. Every time it moves location, it will be tracked like a criminal. It is a little lost, and the snail tracks of the stain get darker every day. Was it Cocteau that dirtied that dress?

Claire Wilcox is the Senior Curator of Fashion at the Victoria & Albert Museum in London, and a Professor in Fashion Curation at the London College of Fashion.

This article was originally published in Vestoj Issue Two, On Fashion and Magic.