ONE OF THE EARLIEST and most unusual writings on fashion was a publication conceived by the French symbolist poet Stéphane Mallarmé (1842-1898). Released in 1874, the same year of its demise, Mallarmé’s La Dernière Mode, is a magazine/art project/journal on fashion that has come to be regarded as one of the most important publications in fashion academia and literature, and indeed our critical understanding of fashion today. What makes the publication so unusual, above others of the time, is that Mallarmé managed every aspect, from the design to content. Authoring articles under different pseudonyms; so that the document is a semi-fictional exercise, creating the myth of fashion, and simultaneously critiquing its values. 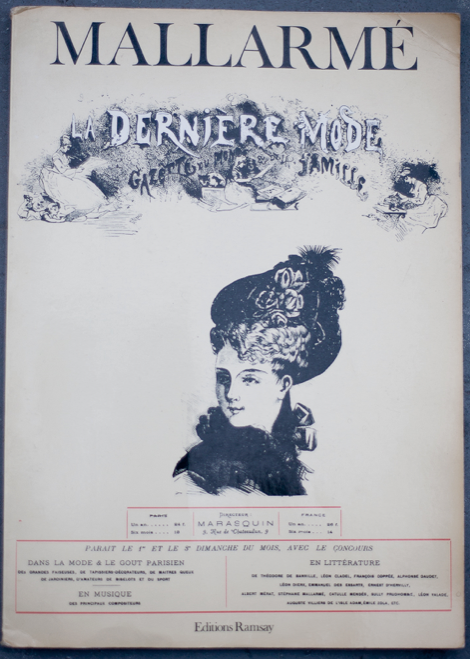 To put Mallarmé’s work in context; the mid-nineteenth century was a time when fashion, and images of fashion became a distinctly commercial and desirable commodity. Industrialisation and progress meant that fashion evolved into something multi-faceted, adapting to the Modern era. Dressing for a new contemporary culture became the main prerogative in the production of clothing, and with it came a new set of standards, idiosyncrasies and potential failures. All in all, fashion became a more observable and accessible phenomenon, and as such, a point of fascination for writers and artists alike. Theorists like Mallarmé, Charles Baudelaire and Théophile Gautier were, among others, reflective of a burgeoning interest in value of fashion in contemporary culture.

Mallarmé himself was an important figure as a writer and poet in Parisian literature circles of the time, know for his salons which invited readings and performances with fellow poets, writers and intellectuals, setting a context for his own work. His writing and work is largely associated with his involvement with Symbolism, as well as having an important influence on later art styles and movements such as Dadaism, Cubism and Surrealism.

Translated as ‘the latest fashion’, La Dernière Mode first came about on the suggestion from Mallarmé’s friend and neighbour, publisher Charles Wendelen, although the magazine was designed, compiled and executed almost entirely by Mallarmé. The first print run of 3,000, funded entirely by the poet, was largely a labour of love. Working with the illustrator Edmond Morin, the aesthetic of the magazine reflected the mode of the time, largely illustrative and gothic in style and design. The content of the project was a strange mix of fantasy and commercial authenticity, with Mallarmé writing most of the texts under a variety of pseudonyms; including ‘Marguerite de Ponty’ (for fashion, and the theory of fashion); ‘Miss Satin’ (giving news of the fashion houses of Paris); ‘Ix’, a male critic (for theatre and books); ‘Le Chef de bouche chez Brébant (for food), etc.1 Under these pretenses, he made himself at once both a journalist and fashion designer, simultaneously able to promote the culture of fashion, as well as reflect upon its short-comings, thus creating a sort of myth through which he explored the boundaries of fashion. Behind the façade of the fashion magazine were thinly veiled witticisms and critiques of the culture of dressing. In a passage from the first issue, Mallarmé’s surreal prose is playfully critical:

‘That instinct of beauty, and of relation to climate, which, under each different sky, governs the production of roses, of tulips and carnations: has it nothing to say as regards ear-drops, finger-rings and bracelets? Flowers and jewels: has not each of them, as one might say, its native soil? This sunshine befits that flower, this type of woman that jewel?’

Although La Dernière Mode has come to be regarded as a seminal work in the context of fashion academia, it still remains little known outside of this discourse, but remains an important and unique example of the power of myth-making in literature on commerce and contemporary culture.