ON MAY 3, 1968, student protests erupted in Paris in response to the conservative and outmoded system of Charles de Gaulle’s post­war France. Factory workers joined the protest in a move that eventually brought the country to a halt that led to a social upheaval regarding workers’ rights, race and gender issues. The events of May 1968, as dress historian Rebecca Arnold argues, redefined ‘the notion of a stable masculine “norm,”’ which was ‘dismantled by the shifting definitions of femininity, which would no longer be seen as “opposite” to the ideals of strength, independence and rationality, previously viewed as the sole prerogative of men.’1 Men entered into the discussion as to what gender and masculinity meant for them, too.

In the years to follow these events, Parisian couturier Jacques Esterel (1918 – 1974), née Charles Martin, launched a timely couture collection for men and women. The collection, which debuted in 1970, grasped these shifting gender ideals with pieces for women, matching his­ and­ hers outfits and unisexwear. A video of Esterel’s collection, ‘Alice 71 in Wonderland,’ aired on French television in February 1971.2 It reflects a breakdown of the fashion system and the gender issues that resulted from the events; an exemplar that periods of crisis are not only foreshadowed by, but also directly result in, changes in systems of dress.

Prior to his career as a couturier, Esterel was trained as an engineer before becoming a composer and singer. His previous career as an entertainer may explain why many critics called him ‘the court jester’ of the Paris couture.3 Never one to shy away from attention, Esterel decided to shave the heads of his models for his July 1964 collection: in his opinion, women were ‘imprisoned by their own hair.’4 Whether or not this was purely for publicity, Esterel was exploring gender in the presentation of his collections long before launching his unisex couture. In 1970, six years after Esterel announced he was freeing women from the shackles of their own hair, an article in French Elle discussed the opening of a ‘monosex’ hair salon in Paris:

Why persist in segregating men and women? You must admit that men and women can dress in the same manner. Even their bodies have undergone a transformation: women are more muscular and men are less beefy. We are taking part in a kind of physiological erosion.

In the opening sequence of ‘Alice 71 in Wonderland,’ a male and a female model walk in from a garden holding hands as large French doors open. The male model is dressed in a floor­-length yellow silk kaftan. Esterel narrates over the video: ‘If I am attempting to dress men not as women, but rather put men in dresses, it does not mean that they have to, but that they can if they want to. It is just another door towards freedom.’5 Alice is represented by the French actress Brigitte Fossey, an attractive blonde who serves to reassure men that if they wish to dress like women, their virility will not suffer as a result.

Virility is a topic that also appears in the aforementioned issue of French Elle in an article about the new male dandies, accompanied by photographs of well­-known male actors and musicians wearing ‘feminine’ dress. Tellingly, these gestures of reassurance reinforce traits attached to gender, and as a result, weaken the idea of uniting the sexes. As philosopher Gilles Lipovetsky writes, ‘the progressive, undeniable tendency toward the reduction of extremes does not culminate in the unification of appearances, but in a subtle differentiation, something like the minimal distinctive opposition between the sexes.’6 In fact, it could be argued that unisex clothing and the prevalence of ‘gender neutral’ clothing has been more successful in eliminating social class through the concurrent rise of ready­-to­-wear, than it ultimately has been in redefining gender binaries.

Lewis Carroll’s Alice continues to be a popular and symbolic character because of her malleability; researcher Kiera Vaclavik writes that she is ‘something of a blank canvas, able to absorb a huge range and combination of emphases and directions… she continues to multiply in a constant stream of new editions and interpretations.’7 Her adaptability as a subject, and one that has often been associated with the psychedelic and hippie movement of the 1960s,  translates naturally as an emblem for the gender crisis and the message of freedom that Esterel emphasises. In an article, ‘Weekend in Alice’s Wonderland,’ that appeared in the May 1969 issue of The Journal of Sex Research, author Hugo Beigel uses Alice to tell the story of the desperate and unhappy life of a transvestite: ‘Alice invited us to visit her wonderland… She performs in night clubs. But after her last fandango, when she takes off wig and costume she is a man.’8

Esterel was not alone in his quest to create a more unified and genderless sense of dress. Other designers that also explored unisex fashion in the 1960s include Marimekko, Yves Saint Laurent and Pierre Cardin. In 1969, Esquire magazine featured an editorial of a man and a woman dressed identically. The accompanying text likened unisex kaftans to Roman togas citing art historian James Laver’s publication Modesty in Dress.9 In his book, published the same year, Laver concluded by predicting unisex clothes as the future of dress.10 Unisex dressing represented a utopian ideal and universal equality. 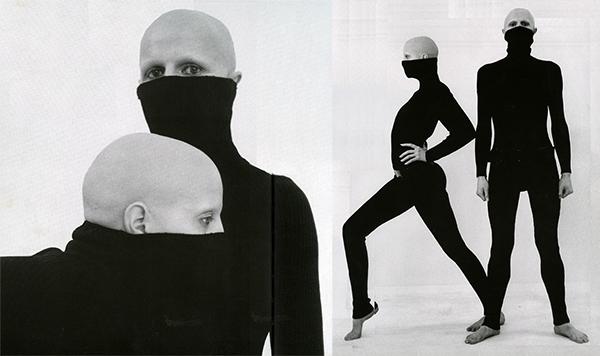 The designer Rudi Gernreich, who also made a foray into unisex clothing in 1970, proposed that, ‘clothing will not be identified as either male or female… women and men will wear skirts interchangeably.’11 He made unisex swimsuits and kaftans, and like the models of Esterel’s collection in the early 1960s, used models with shaved heads. However, unlike Esterel, Gernreich’s choice of models, as well as his use of synthetic fabrics, was far more aggressive. Esterel’s approach was gentle: he emphasises the point that if a man wants to wear a dress he should not feel uncomfortable doing so. Lipovetsky noted that gender crisis has often gone hand­-in­-hand with mass production and economical dressing; Esterel may not have been unique in his unisex collection, but he was unique in that it was not ready­-to­-wear, but unisex couture.12

Though it is unclear how the fashion press reacted to Esterel’s collection, he was a member of the Chambre Syndicale de la Haute Couture, and any controversy surrounding it was not mentioned in the major fashion publications of the era. Esterel is only mentioned briefly in the French Journal de L’annee in the article ‘A Dress for Him, too,’ which notes his collection as a success, and that the dresses for men were rapidly snatched up by specialty stores.13 It begs the question: did men buy his couture dresses?

Considering the relative lack of writing on Esterel’s collections at the time, we can only speculate about what the feminist press, such as the magazine Ms., might have thought about his collection. In an article about the end of couture in the May 1973 issue of Esquire, journalist Patricia Bosworth interviewed the editor of Ms., Mary Peacock, who said, ‘high fashion is dead because women don’t need to use clothes for seduction purposes anymore. Clothes are simple now, more utilitarian.’14 If Peacock was more in favour of utilitarian clothing, Esterel’s couture collection did not fit into this ideal. The women who appear in ‘Alice 71’ still adhere to classical ideals of feminine beauty in clothing that is far from utilitarian. It is true that the collection has more fluidity, and is less stiff and freer in movement: the models do not appear to be wearing any understructure and their bodies look soft. Esterel may have considered himself anti­-establishment, but he still had a foot in the old fashion system – the key distinction is that he was making couture for men.

Fashion scholar Elizabeth Wilson has argued that the rise of the bourgeoisie in the nineteenth century sought a new definition of morality that led to more structured gender roles and dress. Both men and women in the 1960s were criticised for drifting from these social norms in regards to gender. Men’s attire (such as the trend for long hair and tight trousers) raised the question of masculinity, while womenswear abandoned an ultra-­feminine silhouette for short hair and trousers.15 Rebecca Arnold has argued that unisex fashion often appears at times of crisis and uncertainty in the twentieth century, in ‘periods when solace has been sought through this denial of difference.’16

Jacques Esteral and his contemporaries saw the blurring of the aesthetics of gender as a remedy and a hope for the future in both fashion and society in the wake of the 1968 events in Paris. Though recent media coverage on gender links unisex clothing with a shifting fashion system, in 1971 Esterel fundamentally questioned the tradition of haute couture with his monosex couture for men that erred on feminine, upturning the fundamental notions of femininity embedded in haute couture, and in the fashion system at large.