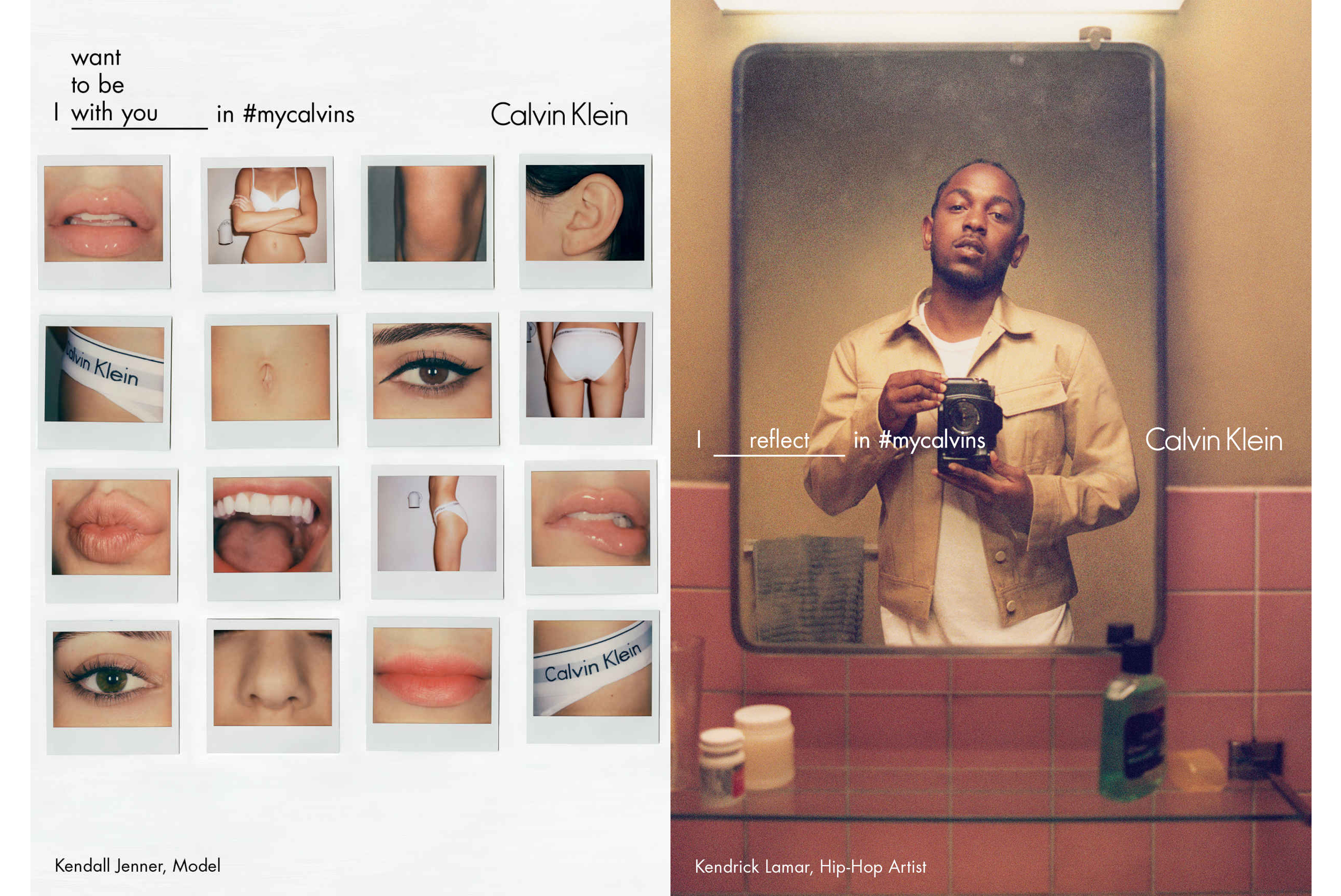 CALVIN KLEIN’S HERITAGE AS a brand that attempts to push the boundaries with controversial, sexually-explicit advertisements has seemingly made a return this season with a campaign that serves up a well-worn narrative of ‘men act, women appear.’1 The agenda of the brand’s new Spring 2016 campaign is clear: the trope of woman-as-objects sells, particularly through the lens of the campaign’s gritty, filmic aesthetic. It might sound like something we’ve heard before, but the reaction to the campaign – which, amongst other images, sees model Kendall Jenner presented as a collection of Polaroid body parts – has been alarmingly docile, prompting us to reignite the discussion since it’s hard to believe so little has changed when it comes to the portrayal of women in mainstream fashion media.

Released in January of this year Calvin Klein targets its youthful followers across print and digital channels by featuring names from music and fashion in the brand’s diffusions, from Calvin Klein Jeans to Underwear. The label worked with fashion photographer Tyrone Lebon for the project, a collaboration that capitalises on Lebon’s association with high fashion, through the niche publications he regularly frequents the pages of, from i-D, LOVE and POP magazines. The images which feature as portraits of each of the stars are sweaty and cinematic, evoking film scenes of downtown L.A., all emblazoned with the hash-tag of the campaign, #mycalvins. A film clip released concurrently with the print images was a mood board of models lolling on unmade beds, rappers in bathrooms, film sets, power lines, tattoos, hedonism and so forth, all aimed at a young market of music and fashion-savvy consumers.

Immediately obvious in the images is a consistent difference in the portrayal of the women in the campaign to their male counterparts. Singers (FKA Twigs) and models (Abby Lee Kershaw) are presented promiscuously, in bed, bent over, or – in the case of model Kendall Jenner – in parts. Jenner is presented as ‘woman-wearing-boyfriend’s-underwear’ in a grid of Polaroids each cropped to an element of her voluptuous body parts – lips, butt, hip – that take on a pornographic, doll-like reference. The shots put the viewer firmly in the position of voyeur, and consumer of Jenner’s dismantled figure, prompting a disruption between her as a ‘complete’ person into a collection of fetishised parts or objects. The spread, which appeared across print and online advertising channels, is underscored by the caption ‘I want to be with you in #mycalvins,’ a thinly veiled reference to Jenner’s (theoretical) availability as a sexual object.

The message is consistent across the campaign, with the texts on the women featured suggestive and provocative. Filling the gap of ‘what they do in their Calvins,’ women apparently ‘arouse,’ ‘dream’ and ‘seduce.’ Whereas the men in the campaign, like rapper Kendrick Lamar, Joey Bada$$ and Sung Jin Park, are, however, presented quite differently and apparently wear their Calvins to ‘reflect,’ ‘focus’ and ‘consider.’ They are (generally) fully clothed, deep in thought and serious, packaged as ‘complete’ human beings: thinking, cultural figures with artistic clout, in contrast to the fragmented, objectified parts of Jenner’s physique.

Reflecting on the campaign prompted us to revisit the seminal 1972 text, Ways of Seeing, in which cultural critic John Berger famously wrote: ‘One might simplify this by saying: men act and women appear.’ Though referring to an age-old phenomenon in the representation of women in art, advertising, as well as self-presentation in everyday life, Berger’s thesis sadly doesn’t seem to have waned. Fundamental is the proposition that, ‘She is not naked as she is. She is naked as the spectator sees her.’ Though image culture becomes increasingly sophisticated, it’s a dynamic still embedded in the DNA of advertising and how men and women are presented in mainstream (fashion) media. In the cK ads Jenner’s body, pieced into bite-sized Polaroids, is packaged to be consumed by the spectator. 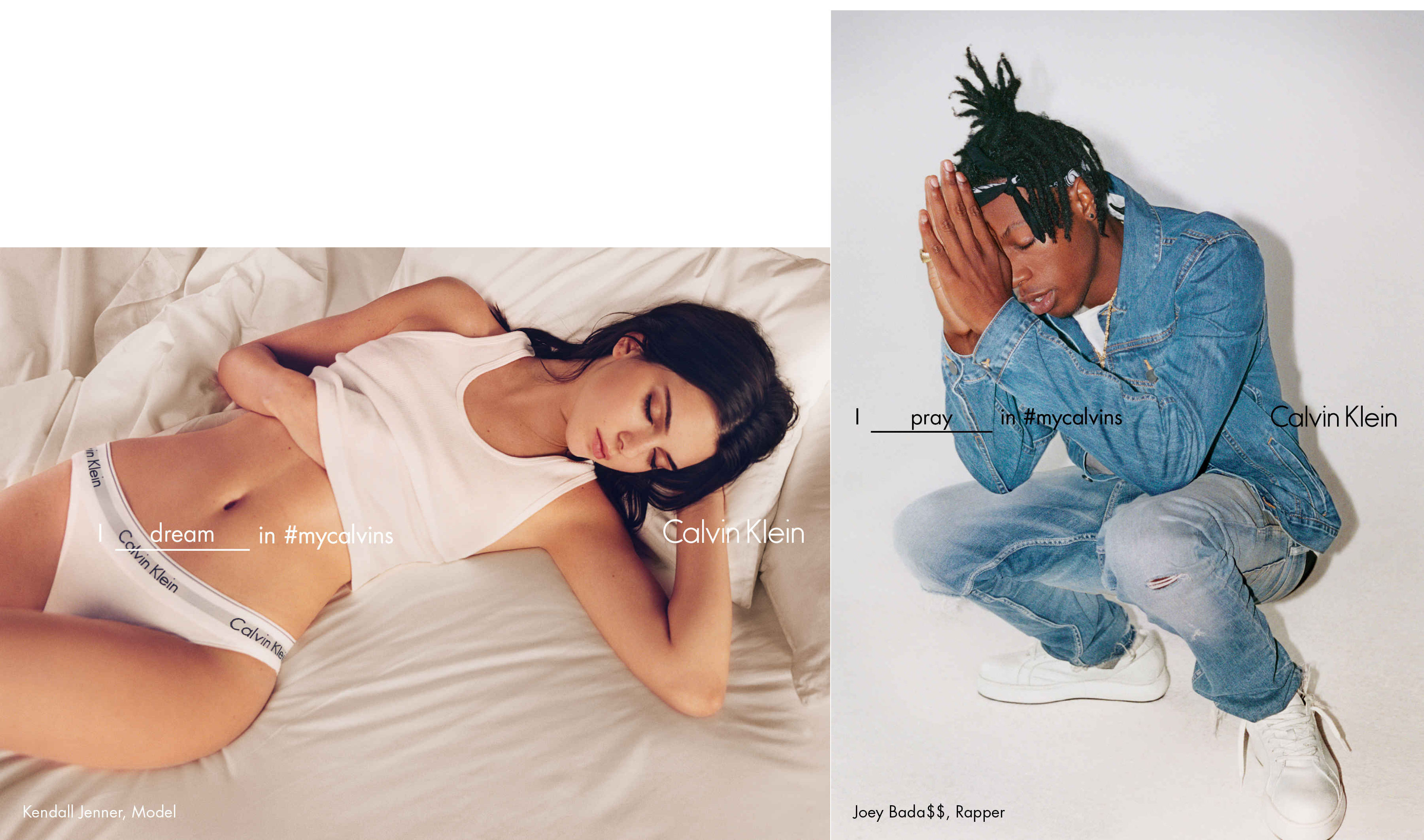 The rift in the gendered ways in which the different figures are presented in this Calvin Klein campaign is another shock-sell by the house, one that has often been an element of their branding strategy2 – particularly for their diffusion lines more targeted towards a youthful market. From Kate Moss’ waif figure appearing across billboards and magazine pages alike in 1992, it seems Calvin Klein’s method has been to tactfully push the envelope and generate controversy, then sales. Unfortunately #mycalvins has had little impact in comparison to past campaigns, like Moss,’ in terms of critical response. The reception could be a result of the calibre of cultural figures included in the campaign – a cross-pollination of up-and-coming musicians, models on-the-make and high profile celebrities. Or it may that in the hands of photographer Tyrone Lebon the campaign is given a certain edge that places it in the realm of editorial, and less as an explicitly commercial ad campaign. In any case, though the uproar in reception of Moss’ waif figure, another case of the woman-as-object, has faded, #mycalvins would suggest not much has changed.

Laura Gardner is Vestoj’s former Online Editor and a writer in Melbourne.