CONTINUING OUR SERIES ON collaboration, we look at some of the most important collaborations that have taken place between fashion designers and figures in the art and design world, in order to examine how fashion can be expanded beyond its traditional system. Collaboration is a term that is used (and sometimes misused) heavily in the art and design world in linking different entities together to achieve a new finished product or project. Today the term is often used as a marketing buzzword for brands within the fashion system: Maison Martin Margiela’s collaboration with retail giant H&M is a recent notable example. Looking at how fashion designers work when collaborating with those outside the fashion system not only furthers our understanding of what clothing can be capable of functionally, but also encourages us to look at a garment or a designer from a new perspective.

In 1997 choreographer Merce Cunningham invited fashion designer Rei Kawakubo to work with him on a dance piece, the result was ‘Scenario’ which premiered in October of that year at the Brooklyn Academy of Music in New York. Both parties brought their own distinctive style in the working process; in collaborations such as this it’s precisely the disparity between each artist’s practice that is integral in creating the new aesthetic. Cunningham, going against the traditional notion that dance should be elegant and harmonious, juxtaposes and layers the bodies on the stage; in much the same way it could be said that Rei Kawakubo breaks from traditional notions of fashion, or womanhood, with her conceptual and often disruptive designs. At the time of the collaboration Kawakubo had just released her now-seminal spring/summer 1997 collection ‘Dress Meets Body, Body Meets Dress and They Are One’, which she adapted for the new medium by adjusting the seams and fabric to allow the dancers on stage to move as freely as possible. Cunningham’s artistic approach often uses chance systems to generate choreography, and ‘Scenario’ was no exception. Cunningham and Kawakubo worked independent of each other, meaning that the design and functionality of the costumes were not inherent to the movements of the dance, allowing chance to become an important aspect of the finished production.

The collaboration and the resulting work was recently presented again in the exhibition ‘Dance Works III: Merce Cunningham/Rei Kawakubo’,1) at the Walker Art Center in Minneapolis. In footage presented at the exhibition, several of the dancers describe the act of wearing the garments in the production; ‘one dancer says her Kawakubo costume was like a hot and bulky parka, and that her view of the other dancers was often obscured. Another enthuses about how invigorating and fun it was for her try to move her legs in the long, tight spandex dress: she simply couldn’t do Cunningham’s choreography and had to adapt.’2) The ‘lumps and bumps’ collection (as it’s often referred to) is conceptualised as a challenge to the ideal of the body and its boundaries with a garment, playing with notions of adding and detracting from the natural form to create ‘beauty’. In ’Scenario’ the collection becomes experiential, influencing the outcome of the dance itself as dancers adapt to the garments. From a visual perspective, the outward curvature of Kawakubo’s clothes strongly parallels with the exaggerated moves of Cunningham, and the costumes are as much performers in the piece as the dancers themselves. Following the premiere of the piece in 1997, Kawakubo told The New Yorker, ‘When I saw the rehearsal for the first time, I was fascinated by how the shapes changed and came alive.’3)

In dance, the role of the costume designer is integral to the performance, and in working with a fashion designer, new aspects are brought forward to the production. In the most successful collaborations each collaborator brings their individual approach to a project, and in the process both expand their own scope and practice, and similarly, our perception of their work. Functionally, dance challenges fashion, pulling it from the fashion system onto the stage, where a garment is able to stand alone and on its own practical and aesthetic merits. This can also be a powerful meeting of two worlds, whereby the conceptual ideology of each party is mingled together to have new meaning side by side. From the perspective of fashion, working with other realms might offer new ways of viewing a garment, and the role of a fashion designer, enabling us in some way to look at the fashion system with more flexibility, and with an open mind. 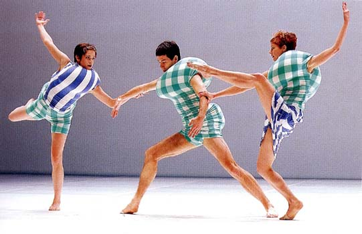 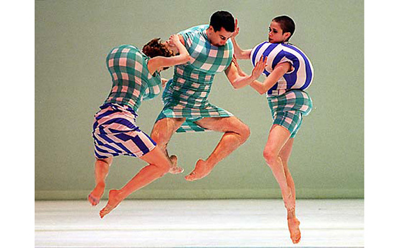