ODILE HAD LEARNED THAT a pregnant woman in need of cheap vestments had precious few options in Scotts Valley, California. On the dim shelf that the trailer’s owner called a ‘standing desk’, she made lists of the thrift stores and church charity shops that she forced herself to visit at least once a week, her only trip out. In Aptos, there was Jet Set Bohemian, but they didn’t have much for the third trimester. Capitola had a Clothes Cottage, a place called Wardrobe, and one of those expensive chains with the beat-a-dead-horse name Motherhood Maternity, the only place she hadn’t gone yet.

Santa Cruz was Odile’s best chance at decent consignment maternity, but she would not go to Santa Cruz. Biff and Staci lived there. Every Tuesday, they brought her groceries from a health food store called Staff of Life. They did not ask for lists, preferring, she supposed, to choose the spartan staples that fed their unborn grandchild themselves.

The saleswoman waited for Odile’s panting to quiet – now that she was in her seventh month, it never really stopped, but she could decrease the volume if she focused – before addressing the top yellow button of the fatigue green sack dress that was one of Odile’s two workable outfits. 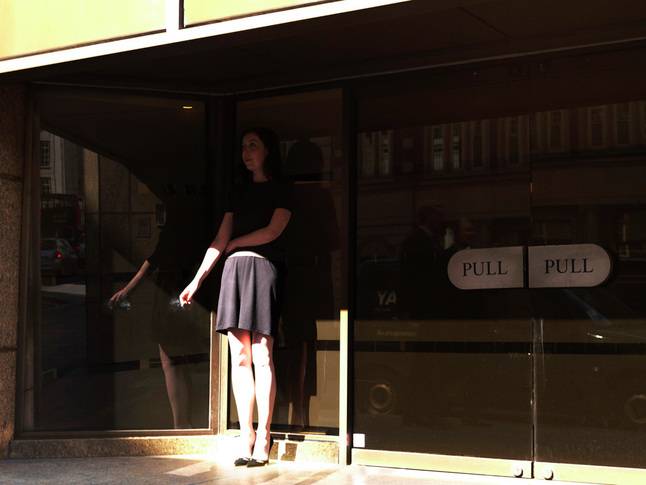 “Can I help you? Maybe you’re looking for our outlet? The nearest one is in Milpitas.” She made a curious stabbing gesture. “I would be happy to print out a map for you.”

In Odile’s old life, she would have wrapped the saleswoman in a banner of invective, unpacking the stupidity of her assumptions with verve and style. She would have enjoyed it. Odile had worn the sack dress in her old life, too. Back then it had been a lovely bell around her curvaceous body, the giant ear-waxy buttons interesting in their high ugliness. She wore her hair in a thick black shock, high and tight like a victorious pilot. But her old life was over, her hair was a damp greyish knob at the base of her neck, and the sack dress’s buttons gapped all the way down, revealing mouthfuls of pink bulge.

Odile opened her mouth. Her eyes drifted to a rack of flimsy jersey scarves, $49.95 each. She backed out of the store.

She cursed the whole way back. Her voice was her only music now; the radio in Biff and Staci’s ancient Volvo, the one they called ‘our old clunker’, had finally given out two weeks earlier. She was only eight years older than the car, Odile realised as she turned onto 17 for the climb up into the mountains. They could be sisters. 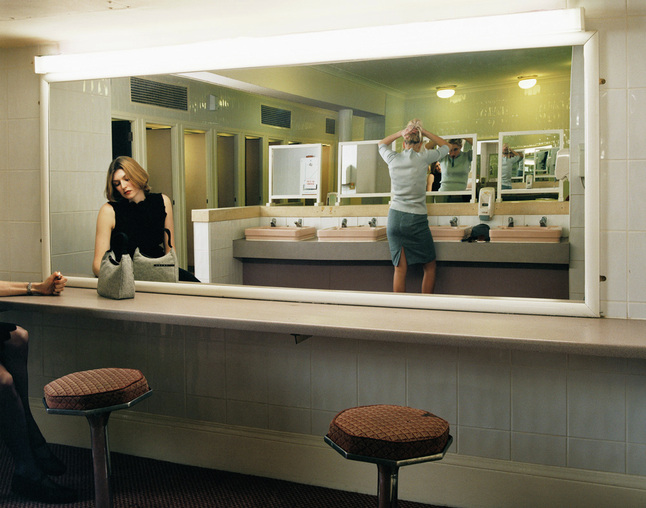 In her old life, Odile had had everything: an apartment in her favourite neighbourhood of Brooklyn with exposed brick and a breakfast nook, a custom-built Italian bicycle slender and silver as cutlery, her dream job in the development department of a prestigious concert hall. At thirty-two, she had accomplished the material goals that had motivated her since childhood, a fact that made her laugh delightedly several times a day. The cherry-on-top was Brin, her boyfriend, who was tall and bespectacled and taught graphic design and held her in his arms every night as they fell asleep. Overflowing with happiness, Odile had decided to take a spiritual vacation alone to recalibrate her sense of herself and generate a new set of goals. Brin had helped her pick the destination: White Valley Retreat, a spa in the glowing red canyons of southern Utah where Odile had ruined her life.

It was January. The canyons wore doilies of snow and the sky graded from white to cerulean. Every day of her two-week trip was scheduled from sunrise to sunset. Odile rose at six and dressed in the hiking outfit Brin had given her for Christmas, each piece from a different, superlative source: boots from Milan, pants from British Columbia, oilskin jacket from Dublin, button-down shirts from London, thermal undershirts handmade in Charlotte, a sports bra from Los Angeles. The care with which Brin had assembled this kit strongly suggested an impending marriage proposal. She should be happy, Odile thought as she laced up her boots in the dark. The fact that she was not, or rather that she was neither happy nor unhappy, she judged an inconsistency to be cured by fourteen days of clean living and fresh air.

The first half of the day was a group hike. Chad, the sturdy local guide, was a twenty-three year old father of four with a loud laugh and a childlike habit of asking inappropriate questions. Most of the other guests were wealthy, mildly delusional middle-aged women who delighted in Chad’s habit of constantly photographing them. There were a few worn-out husbands, and one other man, who glimmered among them like an animal glimpsed through brush. The Landscape Architect.

He fell into step beside Odile on the return leg of their hikes. They ate their aggressively healthy box lunches together on roseate boulders. He reminded her of boys she had gone to college with, fine young fellows full of angst and joy. Guys who liked concerts and video games and studying and partying and talking. Guys who liked everything. At twenty-four, he was six months out of the five-year program that had granted him both bachelor’s and master’s degrees in his field. He was from some town out in California, a place with a delicate Spanish name where Odile had never been. Massive trees older than the oldest civilisation grew there, he told her. There were mountain lions, and ghosts, and dense shady hollows set back in the trees, where anything went and everyone was free.

When they returned to the Retreat each day, the Landscape Architect drifted from Odile without a final word, as if the morning had been a mirage. She became impatient with the massages and facials and meditation sessions, with all the hours that separated her from the next hike, the next return, the next lunch.

On the fourth day, the Landscape Architect pushed his bare ankle against Odile’s as they sat together. She flinched as if he had burned her. On the seventh, he convinced her to sneak out for dinner at a custard place recommended by Chad. The only childless people there, they ate absolutely quietly, swallowed in the clamour of babies and young parents. 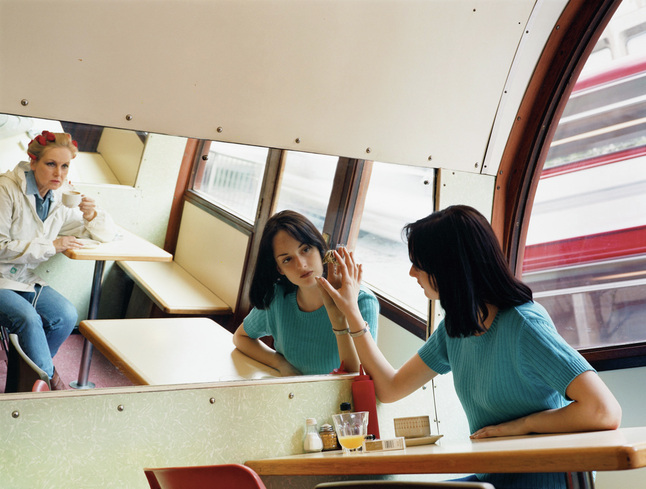 When he invited her into his room that night, Odile went without question, drawn by an unshakeable vision of the Landscape Architect’s inappropriate hiking outfit – blue-and-white-striped Baja hoodie, black jeans ripped across the left thigh, sleek tan leather shoes, Giants cap pulled low over his eyes – strewn across the giant pale bed that White Valley Retreat furnished each guest.

On the last day, the Landscape Architect told Odile to take care of herself with what she thought might be tenderness. She thought happily of returning to Brin and commended herself on the completion of another goal: a passionate desert jaunt with a stranger. Back to my real life, she thought as she watched the red ground recede from her plane window.

And back she had gone, back to Brooklyn and her job and lovely Brin. For ten days Odile lived with the miraculous feeling of having escaped a great calamity. Her sense of righteous success even withstood her period’s failure to appear.

Maybe, since Brin was so lovely, he would understand. 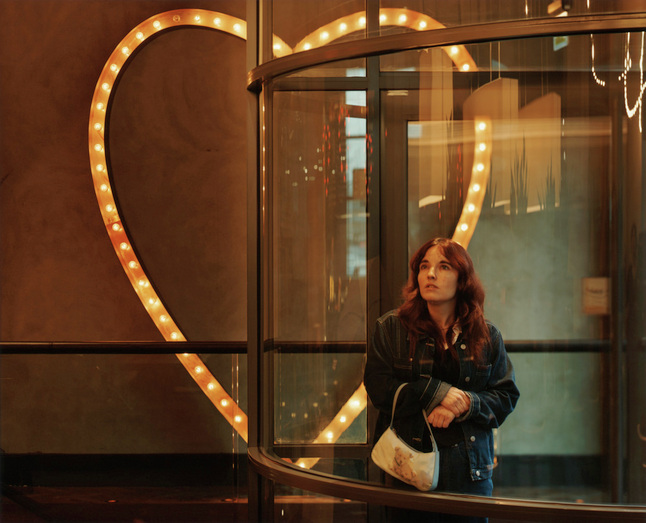 It still amazed Odile: how quickly everything she had built had deserted her. Before her first trimester was up, she had become the uneasy ward of Biff and Staci, the Landscape Architect’s stunned parents, who had installed her in the Scotts Valley trailer. They were paying for it. They were paying for everything, for which Odile hadn’t asked but was grateful. She planned to hoard her severance until the baby came, when time would begin again. Until then she felt passive and still as a mosquito in amber.

“You didn’t have to leave your job.” Her mother’s unhappiness leaked through the phone. “Even if you messed everything up with Brin.”

How could Odile explain it to her? It was like standing in front of the trailer’s tiny closet – a cabinet, really, and a poorly built one at that – with all of her old clothes hanging there, taunting her: the colourful silk dresses she had worn to parties, the Scottish and Icelandic sweaters Brin had bought her for the tough winters, and her favourite green silk robe, the one she liked to wrap up in with coffee and a book on Sunday mornings, while Brin read the Times in the blue cotton yukata she had given him for his thirty-third birthday.

She couldn’t even close the shitty little closet. She saw everything in there all the time, day and night. 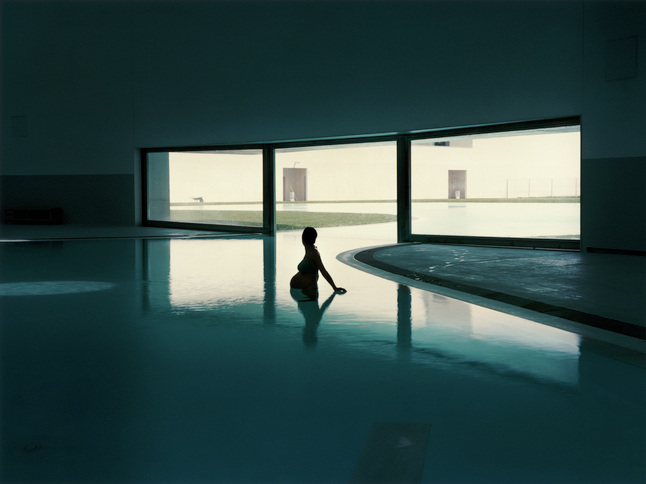 It was almost three when Odile returned from Capitola, giving her only a few minutes to freshen up. She hurried into the trailer, struggling with the sack dress’s buttons. The one that just barely closed over her stomach came off in her hand. Odile tore off the dress, screaming expletives and lunging for her last dress, the filmy blue one she always wore for Owen, the Landscape Architect’s seventeen-year-old brother.

Odile yanked the dress down over her body, hearing her own heavy breathing as she turned to the thin, smudged mirror that hung beside the bed. She looked nothing like herself, but the blue dress hugged her distended parts in a way that helped her believe he might see them as beautiful. She rubbed her last tube of red-orange lipstick across her cracked mouth.

Owen looked nothing like the Landscape Architect. He was muscular and broad-shouldered, and his pale curls reminded her of pencil shavings. He came to the trailer once a week, on Wednesdays, the day after his parents’ morose delivery of rye bread and apples and sustainably-caught canned tuna. Owen always wore the same thing to their meetings, too: plastic slip-on sandals, black soccer shorts, and a white V-neck.

The Landscape Architect, it was believed, was in France. Or South Korea. He had a job, Biff and Staci said. It was the only thing they would tell her about him. But Odile and Owen didn’t talk about his brother. They barely spoke at all.

Their routine was sacrosanct. He knocked and she let him in. He declined her offer of water and waited as she drew herself a mug from the tap. She settled on the bunk, he in the plastic folding chair.

They pretended to talk for a few minutes before Owen asked, “Do you mind?”

He pressed his giant hand against her stomach, fingers outstretched. Odile felt him through the dress, her eyes caught on his delta of chest hair, as the new person between them stretched and opened her eyes.

Lisa Locascio is a writer and editor based in Los Angeles, where she is a doctoral candidate in the department of Creative Writing and Literature at the University of Southern California.