LIKE ALL NEW-BORNS, wearable technologies are invariably smooth, precious and pure. In an i-Device era, the consumer is hidden from the processes of making that lie beneath the surface of the technological sublime. This is a principle that has carried forward into the world of computable accessories – the algorithmic controls embedded in the new Apple Watch, for instance, remain as incomprehensible to the user as the intricacies of traditional timepiece craftsmanship. The Apple Watch boldly claims its reverence for traditional craftsmanship even while it tracks your productivity and efficiency in ever more futuristic ways.1 In the world of high fashion, designers like Iris van Herpen are weaving technology into textiles within the usual stomping ground of the avant-garde haute couturier. In her autumn/winter 2015 collection stainless steel in the warp and silk in the weft combined for a dazzling fluidity.

Computer-mediated developments in commercial wearable accessories and haute couture alike disrupt spaces that previously belonged to tradition. In a world where our everyday clothing could soon compute – that is, be entirely fabricated from computer programming – there is a need to revisit the role of technology in fashion more comprehensively. To uncover the coding behind our clothing could reveal a more dynamic relationship between technology and craftsmanship than we currently know. When we regard software – or ‘softwear’ – as things woven rather than things made, a potential connection between textile and code-based craft is plausible. It’s a journey that takes us from van Herpen to the weavers of the Bauhaus, and then back to the future once more. 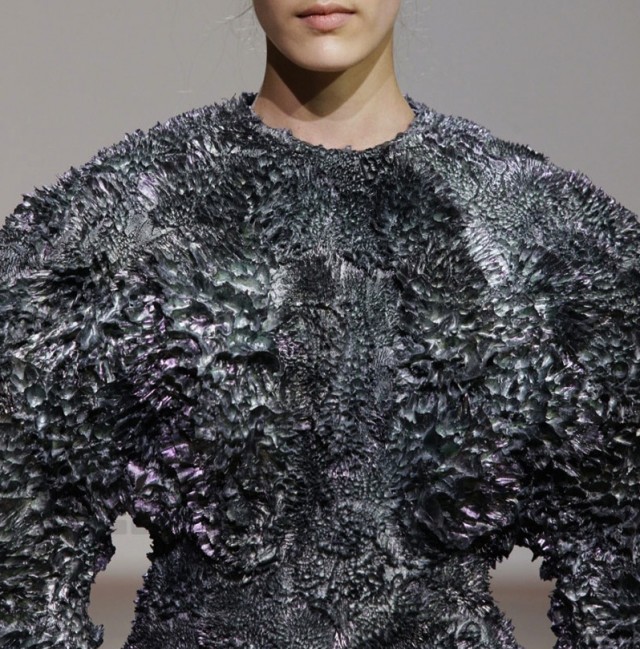 The humble zip, a technology first seen on clothing in the 1920s, reifies how technological innovation has always been embedded in everyday dress: integrated, functional and with the aim to bind edges – not expose them. But taking full advantage of the potential of computable fabrics in the future of fashion will require a desertion of the notion that technology in clothing is for utilitarian purposes only. Iris van Herpen is the first to admit her distaste for this utilitarian stance. Combining artisan skills with complex corners of the biological and technological spheres, she believes the biggest potential for transformation is in the creation of new materials in dynamic hues and shapes.2 Alice Archer, a skilled embroiderer and emerging designer, codes computer programmes to translate her hand-embroidered stitches and textures into digital software format.3 Back in 1999, Issey Miyake and engineer Dai Fujiwara developed the A-POC concept – an acyronym for ‘A Piece of Cloth’ – which used the logic of traditional looms in conjunction with computer software in to create clothing from a single piece of thread in a single process.4 These designers, outspoken about the role of tradition in their use of technology, remain unusual prospects in today’s fashion landscape that, for the most part, prefers to place its conception of luxury outside the technological.

These new prospects of technology in high fashion might force us to reconsider clothes as ‘things’ that have been ‘made’ in the past tense. Anthropologist Timothy Ingold, writing in 2000, recognises the limitations of the term ‘making’ in popular discourse around the generation of things. He argues that ‘making’ defines an activity purely in terms of its capacity to yield objects. ‘Weaving’ is the verb he offers as an alternative; focussing instead on the character of the process by which objects come into existence. The action of weaving registers traces of movement in the object’s very fabrication, making it the embodiment of process itself.5 Following Ingold’s description, objects that have been woven, rather than made, can be said to reveal the traces of the process by which they came into being.

To the casual observer, the worlds of weaving and coding have little in common. The former conjures up visions of early twentieth-century mechanisms, as loud as they are large: weaving with the Dobby and Jacquard looms. Practices of coding, and more particularly live coding, belong to our twenty-first century ‘Masters of the Universe’: shaping our lives through their innovation and flexibility, one quietly-quietly line of code at a time. In 1801 – a good two decades before Charles Babbage’s Analytic Engine – the Frenchman Joseph Marie Jacquard built the first programmable power loom that used a series of punched cards to weave a pattern of threads. The Jacquard loom’s punched cards would later become the basis of computer programming.

Taking the Jacquard loom as its starting point, the Weaving Codes/Coding Weaves project set up by the Kairotic research team is an interdisciplinary collaboration that examines the intersection of early twentieth-century uses of traditional weaving looms and early twenty-first century practices of live coding.6 Its activities include the creation of a programming language that can describe the complex patterned structures of woven threads. This code can then be used to drive computer-controlled looms. By connecting coding and weaving, their research gives an unexpected answer to a question that becomes increasingly pertinent in these contemporary times: what role does traditional craftsmanship have in the modern world? Indeed, when it comes to rethinking the tenets of truly technological clothing, the survival of craftsmanship is not what is at stake. The question needs to be rephrased: how might we reprogram our perceptions, so that craftsmanship and technology can fruitfully cohabit in fashion? 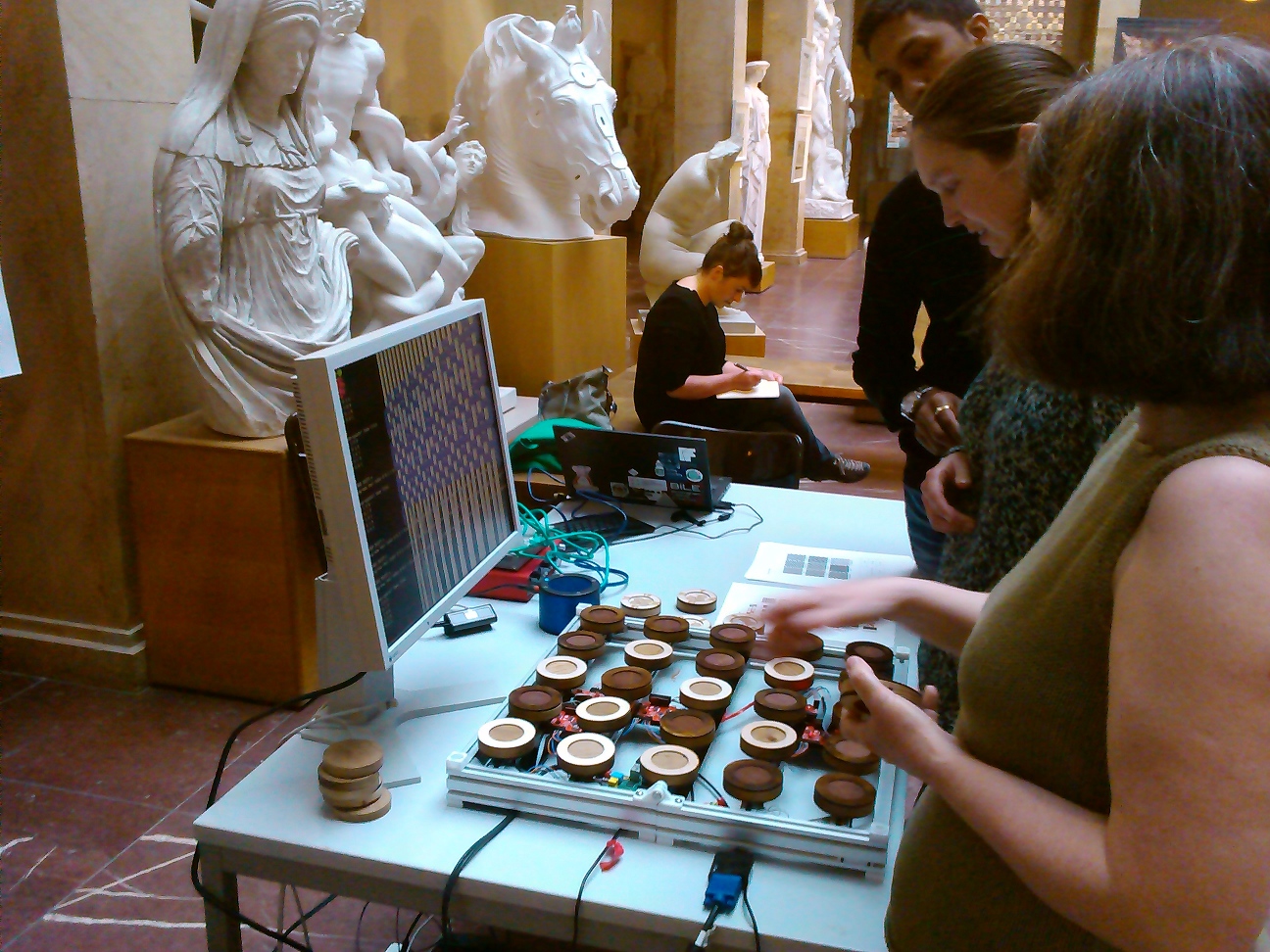 One early pioneer of coding by threads emerges as a striking icon for altering how we are to view fashion items of the future.7 Anni Albers enrolled at the Bauhaus in 1922. There, she discovered that many classes were closed to women, and was disappointed to find her tools limited to ‘some limp threads between the hands’ in weaving class.8 But soon, under the guidance of Gunta Stölzl, her particular combinations of those threads would become forerunners of modern-day technical fabrics: soundproofing, iridescence, and various resistances might form a part of Albers’ productions as much as they do Iris van Herpen’s couture creations or Nike jogging outfits today. By 1928 she was experimenting and exploring the possibilities of automated Jacquard looms, later insisting that her own students design patterns directly onto their own cards.

Anni Albers’ approach was algorithmic. But the results recorded the process of their making: the interwoven elements not hidden from view, but those threads instead constituting the composition and style. Mixing the organic and synthetic without pre-judgement, Albers’ lack of respect for the class system that governs fabrication has much to tell us about our ideas of worthy materials in fashion today. To make a connection between the weavers of the Bauhaus and today’s computer programmers then is not merely to state the debt that coding has to weaving more strongly. Rather, it is to gesture towards a way of looking at fabrics and computer programs alike that regards them as what they truly are: thought made visible.

As Giacomo Balla calls for in his Futurist Manifesto of Men’s Clothing (1913), the clothes of the future should move, have life and resist harmony.9 This is not to say they should necessarily light up, fly, or change according to your mood, like Studio XO’s aviation dress for Lady Gaga, or Richard Nicholl’s Tinkerbell finale for spring/summer 2015. Nor should clothes of the future feel or look as closed off as the Apple Watch: its manifesto boasts of the stainless steel’s ability to resist nicks, scratches or invasion, with its coils woven tightly together in an unchanging pattern.10 Our own futurist project shouldn’t focus on what clothes will look like in the future, nor what they can do. Rather, we should ask how such clothing will register its processes of coding, weaving and making in its very fabrics. By pinning our future fabrics where weaving and coding intersect we can ask: is what one makes really more important than how one makes it? The answer gives clothing new life, or at least liveness.

Claire Marie Healy is a writer, editor and MA student based in London.